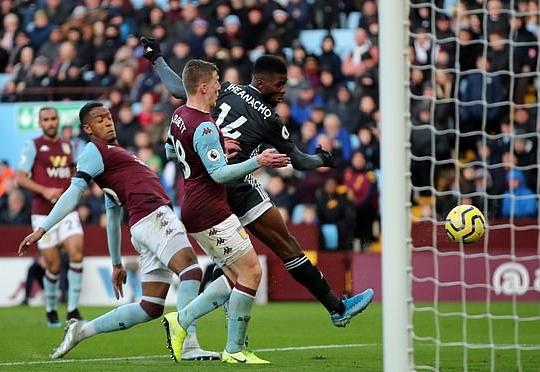 Super Eagles striker, Kelechi Iheanacho once again proved that he still has what it takes to play at the top level after he scored one and assisted another to inspire Leicester City to a mesmerizing 4-1 win over Aston Villa to move six points clear of champions Manchester City, AOIFootball.com reports.

Following his heroics last weekend against Everton, the Nigerian was handed his first EPL start of the season by Head Coach Brendan Rogers, with fellow countryman Wilfred Ndidi also starting in the heart of the midfield for the Foxes.

The former Manchester City forward needed just 20 minutes to justify his inclusion as he superbly set up strike partner Jamie Vardy with a delightful through ball as the English forward rounded off Tom Heaton to make it 1-0.

Iheanacho then got in the act when he reacted quickest to volley home a perfectly executed cross from James Maddison to score his second goal in as many EPL games this season.

The hosts, however, pulled one back before the break via the boots of Jack Grealish before Jonny Evans restored the two-goal margin four minutes after the restart to put Leicester City 3-1 up.

Iheanacho then made way for Harvey Barnes on the 63rd minute with Vardy getting his brace 10 minutes later to complete a perfect night for Brendan Rogers and his lads as they stretch their winning run to eight successive games.

We were Lucky to score the winning goal- Makinwa