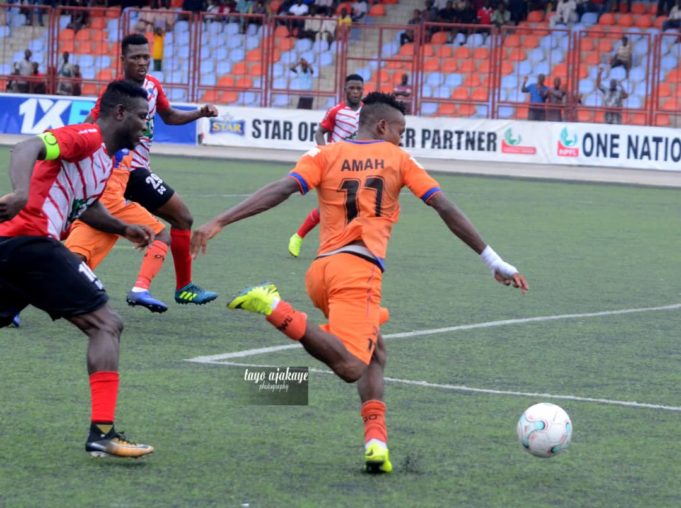 Heartland FC of Owerri new kid on the block, Amah Chibundu has dedicated his match-winning goal against Plateau United FC of Jos in a Match Day 7 duel of the Nigeria Professional Football League to the Technical Adviser of his side, Fidelis Ilechukwu, AOIFootball.com reports.
The former Sunshine Stars of Akure goal poacher, whose 88th-minute screamer ended the unbeaten run of the former Nigerian champions, told AOIFootball.com exclusively that his coach deserves to be celebrated for the victory over the team from the Plateau.
“I’m dedicating my goal against Plateau United to my coach, Fidelis Ilechukwu for his efforts in ensuring that the team gains stability,” said the Abia State-born striker whose assist to Christian Pyagbara won the team a point against Rivers United FC in Port Harcourt.
“We’ve struggled with results from the beginning of the season, and I think he deserves the accolades with the way the team is playing right now.
“I also dedicate the goal to my family for their love and unalloyed support in my chosen career; they’ve been there for me all through,” added Chibundu.
Heartland FC started the current season’s campaign with a 0-1 loss at home to MFM FC of Lagos, but the ruthless attacker believes that despite the poor start to the season, the Naze Millionaires are still challengers in the race for the title, and will not stop fighting.
“We only experienced a setback at the beginning of the season and that doesn’t mean we can’t emerge favourites at the end of the day.
“We’re determined to make the most of our season, and we’ll keep fighting until we get it right,” Chibundu concluded.