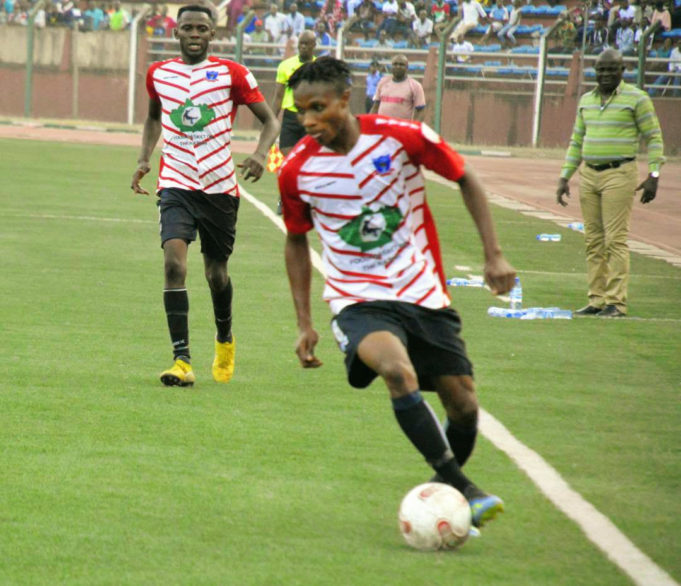 Lobi Stars FC of Makurdi new acquisition, Abdulkareem Mumini has attributed his team’s performance in the ongoing season of the Nigeria Professional Football League to the expertise of Coach Gbenga Ogunbote, AOIFootball.com reports.

In a brief chat with AOIFootall.com, shortly after the Pride of Benue peeped Katsina United FC by a lone goal at the Aper Aku Stadium, Makurdi, the former Abia Comets striker submitted that their near excellent performance this term is as a result of the coach’s experience and expertise, adding that the former Rangers Int’l, Enyimba Int’l, and Sunshine Stars gaffer is a true football tactician.
“Our performance in the ongoing campaign is no doubt a product of our Technical Crew, led by the Technical Adviser, said Abdulkareem whose 7 league goals for Abia Comets FC won him the top scorer’s Award in the second tier league last season.
“With the way he has handled the team so far, I can’t but admit that he is a true football tactician.
Lobi Stars FC currently occupies the second position on the NPFL table just behind coach Abdul Maikaba tutored Plateau United, beating the likes of Kano Pillars on the road and sharing spoils with the current Nigerian champions, Enyimba Int’l in Aba. This, according to the Lagos State born goal poacher is a character of potential champions.
“Having gone a number of matches with high flying results, I’m sure we can challenge for the league title,” Abdulkareem said.
“Giving the top teams in the league a run, is a sign of character, and I believe we can power it to the end of the season,” he concluded.