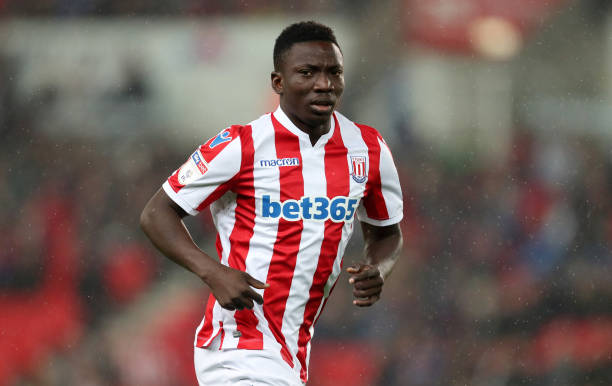 Super Eagles midfielder, Oghenekaro Etebo has confirmed he has already reached an agreement with Spanish LaLiga side Getafe for a transfer to the club after the Europa league chasers agreed on a loan deal with Stoke City, AOIFootball.com can authoritatively confirm.

The 24-year-old midfielder who last featured for Stoke in October 1-0 loss to Sheffield Wednesday before suffering an injury in the clash recently returned to action and was only named on the bench for the Boxing day win against the same side.

“My move to Getafe is 100% confirmed but i am still in Uk awaiting my paperwork and they will be an option to buy permanent at the end of the season,” Etebo added.

The AFCON 2019 bronze medalist joined the Potters in the Summer of 2018 and was a key figure for the club last season as he helped them avoid relegation but will now look to return to Spain and join the likes of Samuel Chukuweze, Kenneth Omeruo, and Chidozie Awaziem.

His move will come as a major boost for Getafe who once tried to sign the Nigerian just before the 2018 World Cup in Russia as they will now hope his tenacity and workaholic nature will help them seek qualification for a European ticket come to the end of the season.

The Nigerian will, however, need to wait a few days for his Getafe debut as he will almost certainly not be ready for Saturdays matchday 19 clash at home to Real Madrid.