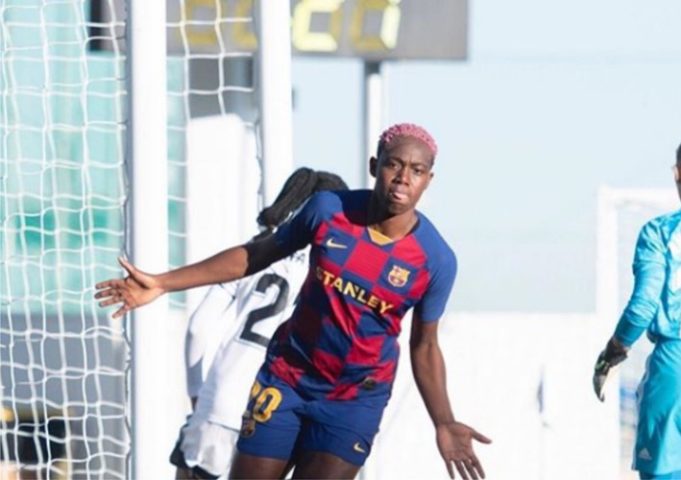 Super Falcons forward, Asisat Oshoala capped off a memorable week in style as she scored four times for FC Barcelona as they thrashed CD Tacon 6-0 to stretch their unbeaten league run to 15 games, AOIFootball.com reports.

Fresh from winning her 4th Africa Female Footballer of the Year crown, the pacey forward returned to the starting XI following her brace heroics last weekend as she went up against fellow national teammate Osinachi Ohale.

Oshoala needed just 100 seconds to put her side ahead when she stabbed home a Marta Torrejon cross for 1-0 before Jennifer Hermoso made it 2-0 on 18 minutes.

The Nigerian then grabbed her brace sixty seconds later to make 3-0 with Marta Torrejon firing home before half time to give the visitors a comprehensive 4-0 lead going into the break.

Not satisfied with her first-half brace, the former Arsenal striker profited from a defensive lapse to net from 30 yards for 5-0 before and get her hat-trick before she then completed her 4th of the game and 13th of the campaign when she headed home a Kheira Hamraoui cross to seal the victory.

The win now sees Barcelona move seven points ahead of their title rivals and closest challengers Atletico Madrid as they now have 43 points from a possible 45.

Nwakaeme, Ogu, Etebo to start for Eagles against Algeria