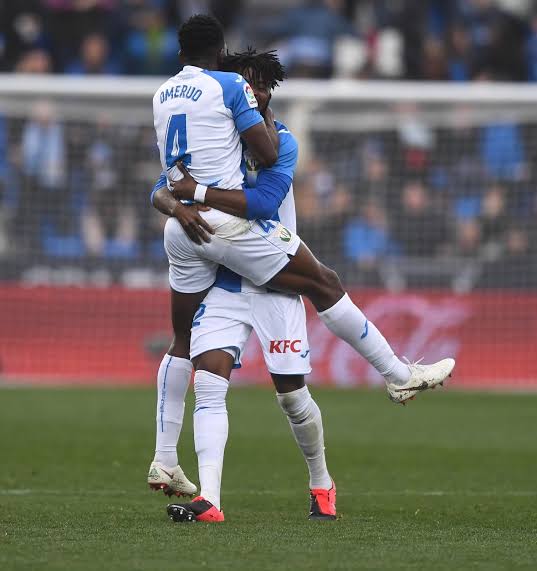 Super Eagles defender, Kenneth Omeruo scored his first-ever goal for Spanish club Leganes as they came from behind to defeat Real Sociedad 2-1 and boost their chances of surviving the drop, AOIFootball.com reports.

The former Chelsea defender returned to the starting lineup after missing Thursday night’s 5-0 loss at the hands of Barcelona in the Copa del Rey to anchor a three-man center-back pairing which also included Chidozie Awaziem and captain Unai Bustinza.

The visitors, however, took the lead against the run of play just after the 20-minute mark when a lack of composure in the heart of the Leganes defense line forced a week clearances from the goalkeeper with Alexander Isak making the most of it as he converted from just inside the box for 1-0.

The hosts then leveled scores just four minutes after the interval when Omeruo turned striker as he expertly struck the ball beyond the helpless Alex Remiro after he was laid on by Martin Braithwaite for 1-1.

Substitute Oscar Rodriquez then completed the comeback when he scored 4 minutes into added time as the host sealed their 1st league win in 2020 and their 4th all season.

The win now sees Leganes move up to 18th on the log with 18 points, level on points with 17th place Mallorca in their quest for survival.

Exciting Serie A has made me a better player, says Simy