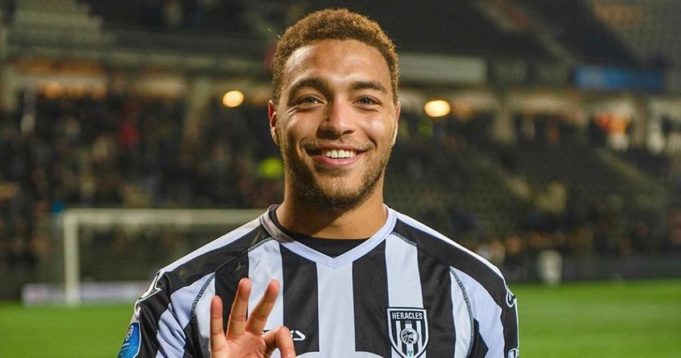 Nigerian striker, Cyriel Dessers was the hero for Dutch side Heracles Almelo as he scored in either side of the half to halt a six-game winless streak when they defeated Fortuna Sittard 2-0 to record their 8th win of the campaign, AOIFootball.com reports.

Having lost their last 5 matches on a bounce, the 25-year-old led the line for 22nd consecutive league game as he hoped to return to scoring form having fired blanks in his last 4 competitive outings.

After a cagey opening half-hour, the host was given a golden chance to take the lead from the spot when George Cox saw red for a professional foul on Sylvester Water with Cyriel stepping up to send the keeper the wrong way and convert for 1-0.

Fortuna then had a penalty of their own in the second half but Mark Diemer’s lame effort was saved by the goalkeeper before Cyriel ensured the points were safe for his side when he scored his 13th league goal on the 70th minute to seal a 2-0 win.

The Eagles hopeful narrowly missed out on the man of the match award as he finished with a rating of 8.2, with his side now moving up to 8th with 29 points from 22 matches.