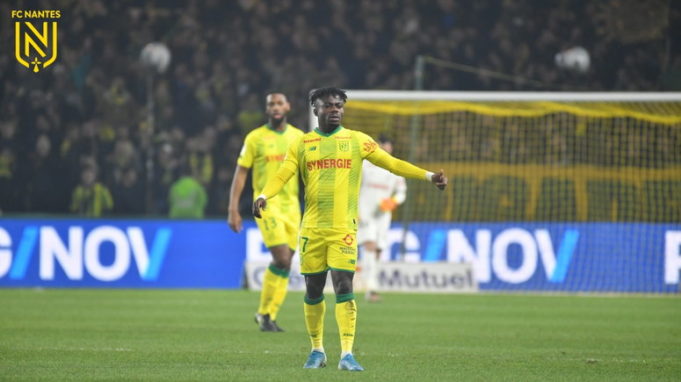 Super Eagles winger, Moses Simon has revealed he will be visiting the medics this week to know the extent of the injury he suffered in Nantes entertaining 3-3 draw away at Dijon, AOIFootball.com can authoritatively confirm.

The on-from striker was scored for the third consecutive game but suffered a knee clash immediately after the goal when he collided with the Dijon shots topper as he drew his side level at 1-1.

Simon did, however, shrug off the injury but had to be replaced three minutes before halftime after signaling discomfort to his knee with Nantes going on to force a 3-3 draw.

“Yea, I got a knock to the knee but for now I can’t say much but hopefully I will get to know the extent in the new week,” Simon revealed.

His injury will come as a huge blow for Nantes who are still hopeful of a European place in the log, with Moses having contributed 7 goals (4 goals 3 assists) in his last six appearances, only failing to score or assist in their 1-0 loss to Bordeaux last month.

The Nigerian has also been involved in 40% of his side’s league goals in 25 matches with Nantes already planning on keeping him beyond the 2019/2020 season.