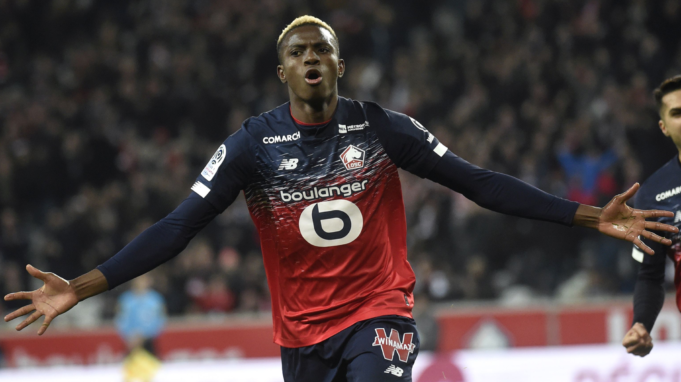 Super Eagles forward, Victor Osimhen continued his mesmerizing form in front of goal when he scored Lille’s only goal in their 2-1 home loss against Olympique Marseille, AOIFootball.com reports.

Having been declared fit for the encounter, the 21-year-old continued his partnership up front with Loic Remy with the hosts hoping to claim a morale-boosting win over their second-placed guest.

But despite a dominant first 45 minutes, the host failed to find the needed breakthrough as Marseille sat deep and defender in numbers with both teams going into the half goalless.

The Nigerian did, however, break the deadlock 6 minutes after the interval as intelligently ran unto a pass from Johnathan Bamba with Osimhen making no mistake as he chipped pass Steve Mandanda to put his side 1-0.

The goal did bring out the best in their visitors who had a penalty saved on the hour mark before Isnard Mandava put through his own goal to make it 1-1 on 66 minute with Dario Benedetto completing the turn around 2 minutes later to seal a comeback win for Marseille.

Osimhen, however, scooped the man of the match award after taking his total tally for the season to 18, making him the highest-scoring African in Europe with Lille still on 4th position, one point behind 3rd placed Rennes in the fight for Champions League football next season.

My hard work will keep me in Eagles, says Olanrewaju