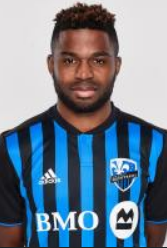 Nigerian International, Orji Okwonkwo began his second stint at MLS side Impact Montreal on a high after scoring the first competitive goal for new head coach Thierry Henry in their 2-2 draw away at Costa Rican side Deportivo Saprissa, AOIFootball.com reports.

Having been named Montreal player of the season for 2019, the 22-year-old returned on another season-long loan, lining on the flanks in a 4-5-1 formation.

The Nigerian, however, opened the scoring in the 12th minute when he fired home from just inside the box to give his side a vital away goal and put them 1-0 up before Romell Quioto put Montreal in dreamland when he fired home 10 minutes later to make it 2-0.

Okwonkwo’s night was then cut short when he was replaced just before the half-hour mark after picking up an injury with his side going on to share the spoils as they conceded two late goals to end the match 2-2.

He will now hope to recover in time for the second leg next week as Montreal hopes to reach the quarterfinals of the CONCACAF Champions League.