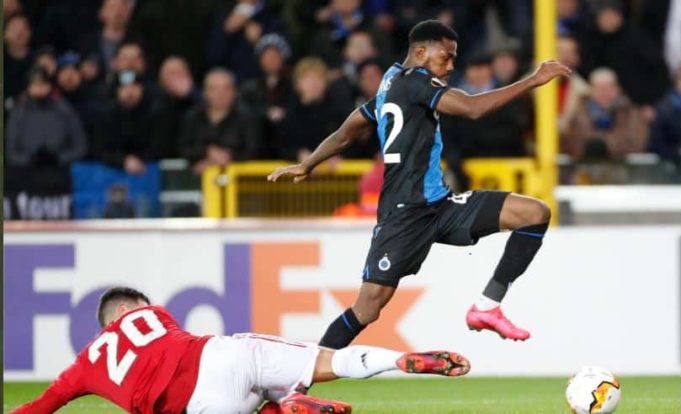 Nigerian international, Emmanuel Dennis once again stole the show on a big night in Europe when he opened scoring for Belgian side Club Brugge as they were held to a 1-1 draw by visiting Manchester United, AOIFootball.com reports.

In a game that had three Nigerians on the team sheet, Dennis was named in the starting XI for Brugge with compatriot David Okereke named among the substitutes whilst new Man United boy Odion Ighalo was named on the bench for the visitors.

With an eye for scoring against the biggest clubs in Europe, striker Emmanuel Dennis sent a clear message to his suitors when he raced on to a dashing clearance from goalkeeper Simon Mignolet on 15 minute before keeping his composure to lob over Sergio Romero to give the hosts the lead.

Anthony Martial, however, drew United level after the half-hour mark, profiting from a poor defensive error to race through before firing home as both teams went into the break level.

Ighalo was then introduced for Martial with 23 minutes left on the clock as he made his European debut but his presence failed to inspire the Red Devils as they returned to Old Trafford with a precious away goal ahead of the second leg next week.

Dennis was rightly adjudged man of the match, with a game rating of 7.5, whilst Ighalo finished with a rating of 6.2 as he continues to push for his first start and goal in the colours of Manchester United.