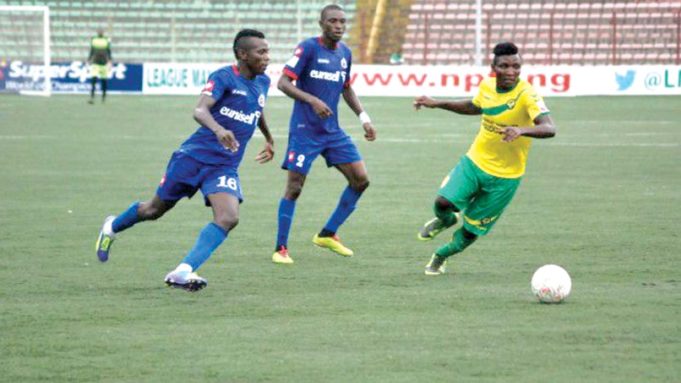 A classy Rivers United performance culminated in a 2-1 victory over Kano Pillars at the Yakubu Gowon Stadium, Port Harcourt, in one of the standout fixtures of the Nigeria Professional Football League (NPFL) on Sunday, AOIFootball.com reports.
Konan Ruffin and Cletus Emotan netted for the ‘Pride of Rivers’ either side of half time while Rabiu Ali converted a brilliant free kick with practically the last kick of the game to give the raucous visiting fans something to shout about.
The win takes United up to second on the NPFL standings, just a point behind the leaders, Plateau United with the Jos club claiming a share of the spoils at the Aper Aku Stadium, Makurdi against third-placed Lobi Stars.
Pillars started well and could have taken the lead inside the opening four minutes when Usman Babalolo rattled the Rivers United goalkeeper, Ospino Egbe with a long-range drive which was pushed away for a corner.
The hosts slowly grew in stature and began to dominate with their quick passing game which earned them a penalty in the 18th minute after midfielder, Esor Nelson was fouled in the box.
Esor had rounded the Pillars goalkeeper, Joshua Enaholo following some intricate bits of passing and movement and was on the verge of plating an emphatic finish into an unguarded net before he was upended by the startled Enaholo.
Ruffin is a deadly customer from 12 yards and he made no mistakes, firing home with frightening force despite the best efforts of Enaholo, who got a hard to the fierce effort, to send the home fans into fits of euphoria.
The visitors then took over, dominating large stretches of the rest of the half with veteran Ali, enjoying their best chance, a free kick from the edge of the area which he placed well wide in the 41st minute.
United had enjoyed two gilt-edged opportunities before Ali’s moment of indiscretion and had themselves to blame for not taking even one of those to further stretch their lead.
The first fell to Ruffin who latched onto Emotan’s sleek pass on the half hour before blazing into Orbit from a tight angle with just the goalkeeper to beat.
Michael Gopey also went close, a minute later, with a header which Enaholo managed to scramble away for a corner.
Pillars started the second stanza gamely and continue to look dangerous as they stepped on the accelerator in search of the second goal.
Substitute, Ahmad Musa came close in the 82nd minute when he side footed Nyima Nwagua’s inch-perfect cross just wide with just Egbe at his mercy from four yards out.
It was a shocking miss which was to attract consequences as the hosts made the points safe with a delightful goal five minutes from the end.
A delightful passing move carved open the Pillars backline and Emotan was afforded the luxury of time and space to pick his spot and curl exquisitely past the badly-exposed Enaholo in the Pillars goal.
Ali’s intelligent free kick just before the end represented nothing more than scant consolation for the hosts as referee, Ndubuisi Ukah brought a wonderfully-open and richly entertaining game of football to an end.
Head coach of Pillars, Ibrahim Musa rued his side’s missed chances in the game as he discussed with the official Rivers United FC website, www.riversunitedfc.com.ng after the game.
“We need to improve in our finishing. That is the only problem we are facing,” he said.
On his part, technical manager of Rivers United, Stanley Eguma
“We could win the league title if we intensify our efforts because it is very possible. We will not allow the tempo we have built to drop and we cannot allow the little success we have gotten so far to get into our heads now,” he said.
Rivers United have now amassed 36 points from 21 matches and next travel to Okigwe to face Heartland FC in their next game in the competition.

Jupiler League: Onuachu nets winner to end year in a high with Genk