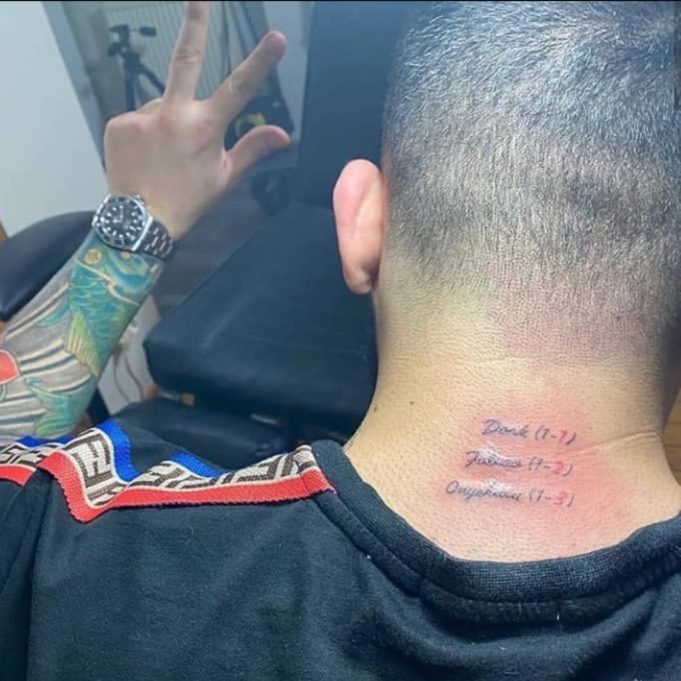 An unidentified fan of Turkish top side Galatasaray has tattooed Super Eagles winger, Henry Onyekuru’s name on his body after the team’s historic 1-3 win over eternal rivals Fenerbahce on Sunday, AOIFootball.com reports.

The former Everton FC winger scored the final goal that completed Gala’s win over Fenerbahce which was the first time in 20 years the Fatih Terim led side would win at the Sukru Saracoglu Stadium, home ground of “The Yellow-Navy blues.”

The fan inscribed at the back of his neck the scoreline, the time goals were scored and the names of the scorers.

Fenerbahce scored first through Max Kruse’s penalty in the 21st minute before Ryan Donk equalized for Gala in the 40th minute. Radamel Falcao increased Galatasaray’s lead in the 80th minute via a penalty before Henry Onyekuru raced from the defense to Fenerbahce’s goal, rounded the goalkeeper before slotting into the far corner.

His beautiful goal was the nail that sealed the coffin for Fenerbahce and sparked crazy celebrations for Galatasaray fans in the mad football country after the historic win.