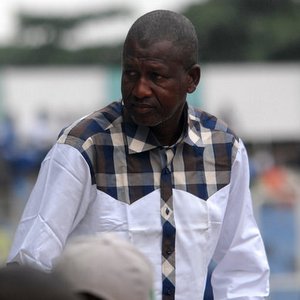 Plateau United FC of Jos Coach, Abdul Maikaba has stated that it will be a professional affair when his side lock horns with neighbours, Wikki Tourists of Bauchi, in a Nigeria Professional Football League Match Day 23 duel at the Abubakar Tafawa Balewa Stadium on Sunday.
Speaking exclusively to AOIFootball.com shortly after his team concluded their last training session before embarking on the trip, the former U-20 assistant coach submitted that being a former coach of the Bauchi side would not have any bearing on him when both sides meet, therefore, they would approach the game professionally because both teams have a point to prove.

“We’re approaching the match strictly from a professional point of view,” said Maikaba who led Akwa to Aiteo Cup glory in 2017.

“We need the match to consolidate on our position on the log of the NPFL, and Wikki Tourists also need the match to ensure safety from troubled waters,” Maulana added.
The Kano State-born football tactician has also dispelled the impression that he understands the football pattern and philosophy of the Yankari Travellers, positing that a lot of coaches have handled the side since his departure, and as such, he can only understand their playing style moments after kick-off on Sunday.
“After about ten or twenty minutes of watching any team, I should be able to understand how they play; their weakness and their strong points.
“It’s almost 5 years that I left Wikki Tourists, and even if I left them with a football pattern or philosophy, the turnover of coaches must have swallowed it up.

“We’ve resolved to face the game from a standpoint that we don’t know anything about them, because I’ve not seen Wikki play since coach Abdallah took over at the club,” concluded Maikaba.

Staff Reporter - May 27, 2017
ALL CATEGORIES
SOUNDCLOUD