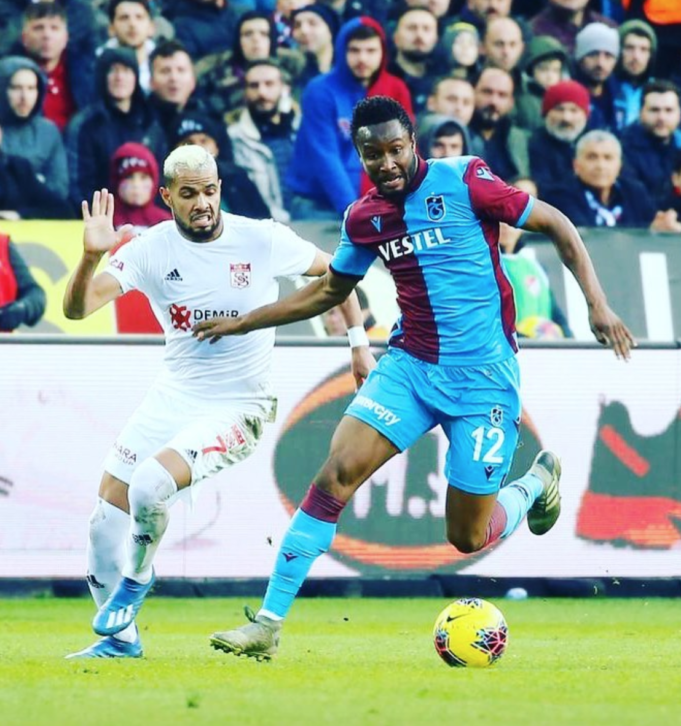 *Trabzonspor set to freeze out Mikel for voicing out

Former Super Eagles and Trabzonspor of Turkey midfielder, Mikel John Obi has appealed to Turkish League football authorities halt the league to avoid an outbreak such as that of Italy, Spain, England where footballers have been infected with the dreaded coronavirus, AOIFootball.com reports.

Though the World Health Organisation declared the disease a pandemic, which subsequently has made everything in the world to come to a halt for the main time, it seems football authorities in Turkey have allowed the league to continue, with some players complaining about the lack of fans making the game uninteresting, and players still unsure about their safety.

As a precautionary move in other parts of Europe, trainings have been called off and everyone advised to stay at home to avoid a further spread of the virus.

Top football players and managers like Mikel Arteta of Arsenal, Ezequiel Garay of Valencia, Hudson Odoi of Chelsea and Daniel Rugani of Juventus are some of those infected.

Though the news in Turkey is that 18 people have been infected and no deaths recorded at the moment, it is still unsafe to say that it is well contained and there would not be further spread in days to come.

Already, players who have families are scared but the authorities are only after money and their own personal interest at the expense of the safety of the players.

Recently, Mikel John Obi advised that the safety of everyone involved in football is more important than the game, a point supported by legends like former Chelsea star Didier Drogba and Radamel Falcao who commented on Mikel’s page to applaud his assertion. 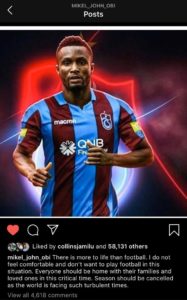 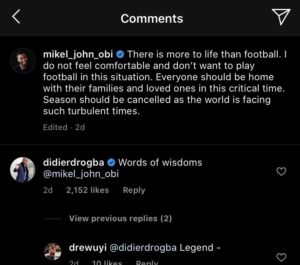 A global icon like Mikel’s stance seems not to have been welcomed by fans of the club who believe the league should not be canceled as Trabzonspor are favoured to win it for the first time since 1984.

Meanwhile, for voicing out his opinion, AOIFootball.com gathered that Mikel is set to be victimized by the club authorities as they aim to freeze him out of the club’s subsequent games.

This certainly is not seen as a good move by Trabzonspor as it looks like the days of the former Nigerian captain are numbered after insisting that the right thing be done to stem the spread of the global pandemic.

And with the fans calling him to leave the club on his official Instagram page, it definitely looks like his days as a Trabzonspor player are numbered and may come to an end when the season ends.

The deaths recorded since the outbreak of the virus is well over 5,000 and with over 175,000 people infected with the Wuhan virus globally.