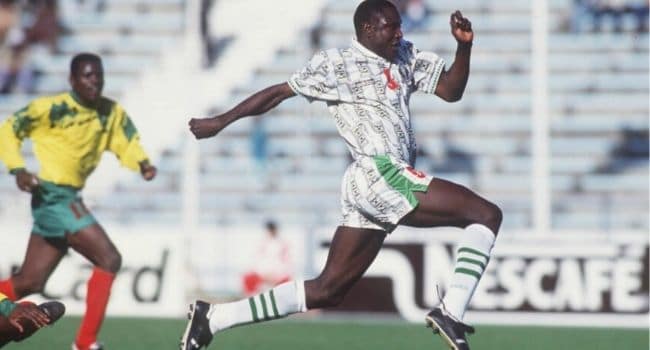 Some Nigerian ex-internationals have showered encomium on the Minister of Youth and Sports Development Mr. Sunday Dare for his benevolence towards the mother of late Rashidi Yekini.

Mutiu Adepoju who was roommate to the late Super Eagles striker said, “I almost wept when I heard that the Minister made some donations to the mother of my late friend because he wasn’t just my teammate. He was my friend. The Minister apart from the food items and money, placed her on a monthly allowance. That is huge. This is what should have been done a long time ago. Rashidi Yekini served this country wholeheartedly and was one of the reasons we played the first World Cup. The Minister has done well and I want to commend him”.

According to former Super Eagles goalkeeper Ike Shorunmu, “It’s about time. The woman is aging and the Minister’s kind act is remarkable and should be commended”.

Daniel Amokachi who is Nigeria’s ambassador for Football said, “There’s no better time than now. It is really commendable that the Minister remembered who we should normally all remember. I want to thank the Minister for all he is doing. He has given a new face to sports in Nigeria”.

Further reminiscing, Amokachi said, “Yekini was a phenomenal striker. Hitting the back of the net was always sure each time we played together”.

Adding his voice to the commendations, former Super Eagles assistant coach Imama Amapakabo said, “For me, it is not about the money but the ripple effect it will produce. For the Minister to remember the woman during the Ramadan, not forgetting that there is a pandemic, it is huge. We have had Ministers in the past and the Football Federation, for the Minister to have remembered his mother, many people have forgotten that the woman is still alive but with this act, it has reminded them that she is still there and hopefully good-spirited Nigerians will follow suit”.