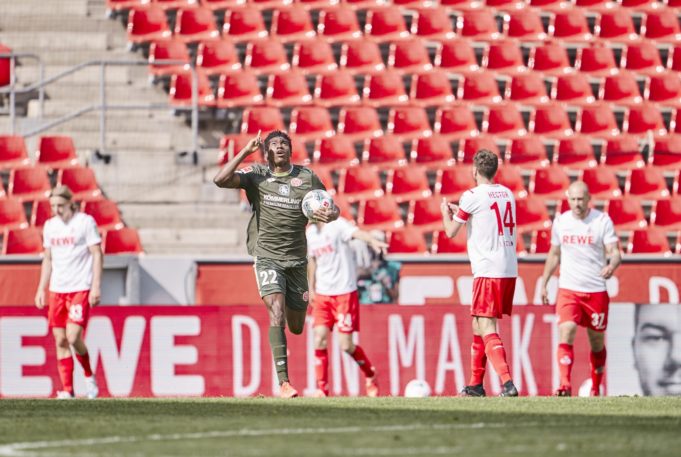 Former Golden Eaglets forward, Taiwo Awoniyi is elated after making history on Sunday for German side Mainz 05 when he became the second-youngest Nigerian to score a league goal in the Bundesliga after helping his team come back from two goals to draw at FC Koln, AOIFootball.com reports.

The 22-year-old has endured a tough season at the Opel Arena and was only good for the bench for the visit to the Rhein Energy Stadium with the hosts also naming new Eagles invitee Kingsley Ehizibue among the substitutes.

The hosts however needed just six minutes to draw first blood from 12 yards when Mark Uth converted from the spot before half time substitute Dominick Drexler set up Florian Kainz on 53 minutes to put Koln 2-0.

Awoniyi was then introduced moments later for Dong-Won Ji in just his 7th appearance of the season as the visitors went all out to try and get back into the game.

The Liverpool loanee needed just 5 minutes to show why he deserves more chances in the team when he showed smartness and composure to tuck home a Riddle Baku cross to make it 2-1 before a solo run from Pierre Kunde 18 minutes from time completed a 2-2 comeback for Mainz.

“I’m really happy about scoring my first goal for #Mainz! We came back very well as a team today and fought our way back into the match,” an excited Awoniyi stated just after the final whistle.