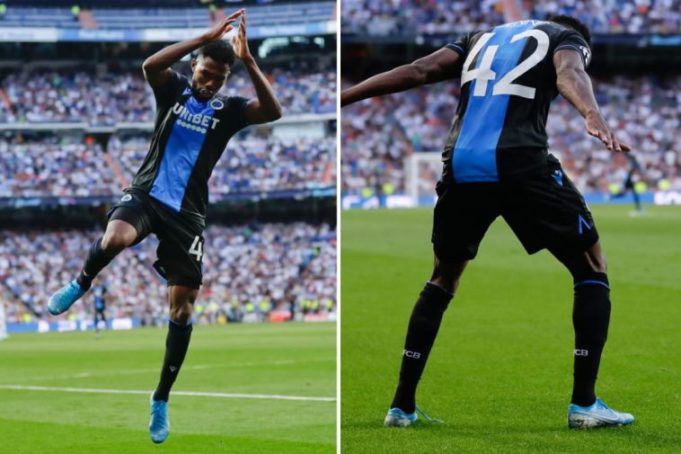 Super Eagles and Club Brugge of Belgium forward, Emmanuel Dennis has revealed he told fellow compatriot Victor Osimhen he would celebrate like Real Madrid legend Cristiano Ronaldo if he scored against the Los Merengues in their UEFA Champions League clash earlier in the season, AOIFootball.com reports.

Dennis scored twice in a memorable start to give Club Brugge a 2-0 lead in the first half which they threw away to draw the game.

The Nigerian’s first goal came in the ninth minute after he got on a cross from Percy Tau. But one-on-one with Real Madrid goalkeeper, Thibaut Courtois, the 21-year-old first took a poor touch before he slipped but luckily for him the ball cannoned off his shin past Courtois.

Speaking to Super Eagles Media team in a live chat on Instagram, the Arsenal target revealed he told his fellow national team compatriot about the game and that he was going to mock the 11th time European champions if he scored against them at the famous Santiago Bernabeu by adopting the celebration of the club’s legend Cristiano Ronaldo and he did so twice in after his goals went in.

“I had a chat with my friend Victor Osimhen and also Oghenekaro Etebo that I was going to celebrate like Cristiano Ronaldo if I scored against Real Madrid in the UEFA Champions League, and I was happy I did score though I wanted my team to win, it’s a shame we didn’t come back with a win,” he said.

Dennis recently won the Belgian top division title with Club Brugge after the league was declared ended by the organisers at the beginning of the week.