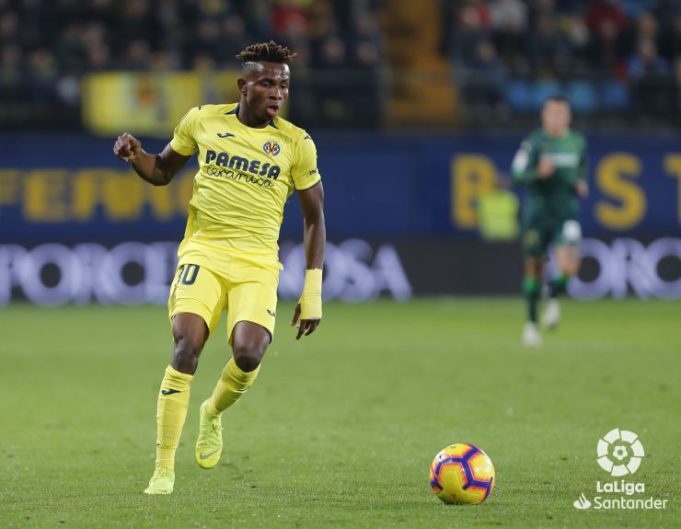 The Spanish LaLiga returned to action on Friday night with plenty of Nigerian interests on parade as they jostle for European qualification and survival, AOIFootball.com reports.

At the Estadio Nuevo Los Carmenes, the duo of Ramon Azeez and Oghenekaro Etebo went head to head as Granada played host to Getafe in what was a clash between the 9th and 5th placed teams.

The hosts however left Azeez on the bench for the entire match duration whilst Etebo was a constant figure in the middle of Getafe midfield as they allowed a first-half lead slip away to fall 2-1 on the night.

The Nigerian who was booked just after the hour mark still stood out in the clash as he finished with a fair rating of 6.9, winning 12 duels, completing 100% of his take-ons, made 3 key tackles, 2 interceptions and also one big clearance in the game.

On Saturday, Eagles wing wizard Samuel Chukwueze was the big difference for European chasers, Villarreal, as he came off the bench away at Celta Vigo to help his side clinch a 1-0 win on the road to move them within just four points off 6th place Atletico Madrid.

The Eagles sensation came off the bench just before the hour mark for Gerrard Moreno and should have made an instant impact when he mesmerized his way on the flanks before firing straight at the goalkeeper much to his own frustration.

Chukuweze was however involved in the winning goal when his initial pass to set up Carlos Bacca fell kindly to him as he aimed but saw his effort cleared off the line before the rebound was tucked home by substitute Manu Trigueros.

Meanwhile, at the Estadio Municipal de Butaque, Eagles duo of Chidozie Awaziem and Kenneth Omeruo led the line for Leganes as they lost 2-1 at home to Real Valladolid and miss out on the chance to move out of the drop zone.

A mixup between Awaziem and goalkeeper Ivan Cuellar gave the visitors a perfect chance to strike first blood after just 100 seconds as Enes Unal made the most of the goof to put his side one goal up.

The host however continued to push for an equalizer but their efforts was made even harder when Ruben Alcaraz made it 2-0 before the hour mark with the impressive Oscar Rodriquez netting what only proved to be a consolation six minute from time from the spot.

Despite the defeat Eagles defender Kenneth Omeruo stood like a rock in defense with a rating of 7.1, whilst Awaziem finished with a rating of 6.1 with Leganes now needing to make the most of their remaining fixtures to avoid relegation.

Dropping down to the LaLiga 2, former U-17 world cup winner Kelechi Nwakali was an unused substitute for visitors Huesca as they made light work off host Malaga, beating them 3-1 to remain in strong position to clinch a promotion ticket.

The former Arsenal youth player who has had a rough patch since his move to Spain will however be hopeful of some competitive game time under his belt as he bids to end his 7 month wait without a competitive football action.