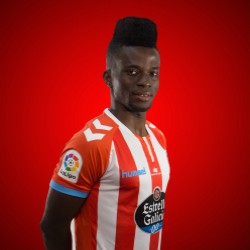 Former Super Eagles captain, Ogenyi Onazi had a nightmarish post-COVID-19 return to football on Monday night after he lasted just 13 minutes into his side’s 1-0 loss away at Sivasspor whilst it was a return to the starting XI for midfielder Ramon Azeez in Spain, AOIFootball.com reports.

Yusuf Otubanko: The former Julius Berger forward was on from start to finish for Armenia side FC Ararat-Amenia as they forced host FC Noah to a 1-1 draw to remain top of the championship playoffs round.

The 27-year-old recently joined the club in January from LASK and will almost certainly win the league as they comfortably sit at the top of the log with 45 points.

Ramon Azeez: The Eagles midfielder returned to the starting XI for Granada as they dug deep to salvage a 2-2 draw away at Real Betis to keep their hopes of a European finish alive.

Ramon featured for 90 minute before he made way for Antonin with the midfielder earning a rating of 6.6, completing 89% of his passes, winning 3 duels and also making 2 big clearances.

Ogenyi Onazi: The former Lazio midfielder had a night to forget on his first return to action since March, lasting only 13 minutes during his side’s loss away at Sivasspor.

Onazi came off the bench at half time but was however replaced minutes later after picking up an injury for the visitors.

Moses Ebiye and Ifeanyi Mathew: Both players came off the bench for Lillestrom Sk in a friendly against Jerv with Ebiye making the biggest impact, scoring his side third goal to seal a 3-0 comfortably win.

Joshua Akpudje, Idowu Akintola, and Nnamdi Offor: Former MFM of Lagos defender Joshua Akpudje made his European bow for Latvian side BFC Daugava Daugavpilsas he partnered another Nigerian Idowu Akintola in the heart of defense but the duo could not help them from going down 2-0 to FK Liepaja.

Nnamdi Offor also featured for 90 minute for the host whilst the visitors game time to the duo of Richard Emeka Friday and Dele Ola Israel who both came off the bench.

Dele Alampasu and Kazeem Aderounmu: Former U-17 World cup winner Dele Alampasu was on the bench for the entire 90 minute in FK Ventspils 1-0 away loss at Rigas Skola, Kazeem Derounmu, however, came off the bench after the hour mark but could not help the visitors salvage a point.