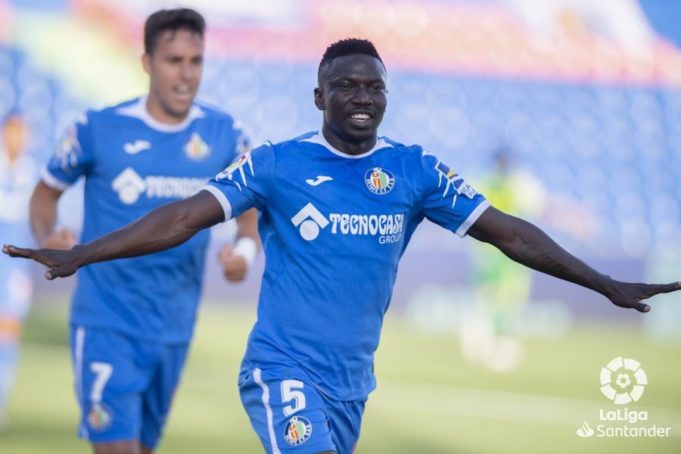 Super Eagles midfielder, Oghenekaro Etebo scored his first goal for Spanish side Getafe as they were held to a 1-1 draw by visiting Eiber in their quest for European football, AOIFootball.com reports.

Without a win in their opening two matches since the restart, the on-loan Stoke City midfielder started his 6th game of the campaign with the hosts hoping to close the gap on 4th placed Sevilla who drew earlier on Friday with Barcelona.

That target however looked very much in the balance when a lofted cross into the box found Angel Rodriquez whose initially volley fell kindly to Etebo as he wasted no time to blast home from inside 12 yards to make it 1-0.

The visitors then profited from a lengthy first-half additional minute when Charles Dias equalized six minutes into first-half stoppage time much to the frustration of the home team as they went into the break level at 1-1.

Etebo then made way for Jason in the 69 minutes after picking up a knock with the host only just saved by the VAR when Pedro Bigas 88th minute strike was ruled out for an infringement.

“Happy to get my first Goal @GetafeCF heads up we go again lads,” Etebo twitted after the game.

The 24-year-old finished with a rating of 7.0. Getafe is now 5th on the table with 48 points, four points behind 4th placed Sevilla in the race for Champions League football next season.