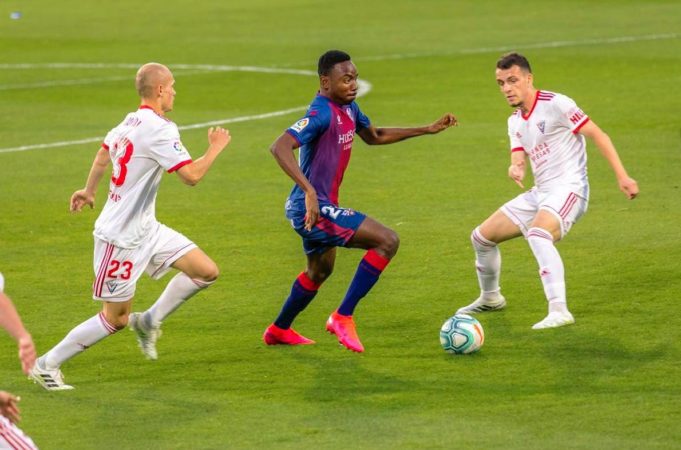 Nigerian international, Kelechi Nwakali has vowed to do everything within his reach to ensure LaLiga 2 side Huesca return to the elite division despite failing to win their last two games, AOIFootball.com reports.

The Olympic Eagles skipper, who is beginning to enjoy competitive football again, told AOIFootball.com that his side remains focused on gaining promotion and will continue to work hard in their remaining games to ensure they go up.

“I’m excited to be playing competitive football again. I have waited so long for this moment and I’m fully committed to helping the club achieve promotion.

“The aim is to pick one of the automatic promotion tickets; we have a big game tomorrow against the league leaders Cadiz. It won’t be an easy match but the entire squad are very committed to ensuring we get back to winning ways,” Nwakali said.

On pushing for his first start for the club, having twice come from the bench in their last two matches, the 2015 FIFA U-17 golden ball winner stated that he will continue to work hard in training and hopes he gets his first start soon.

In his two games, the midfielder has already displayed excellent abilities on the ball, completing 90% of his passes per game with his composure in his half a standout one as he is yet to concede the ball to any opponent, having completed 100% accuracy when in his half.

Huesca is currently 4th on the LaLiga 2 standings and will entertain table-toppers Cadiz on Wednesday night hoping to close the gap as the league enters its final stretch with just 8 rounds of matches left.