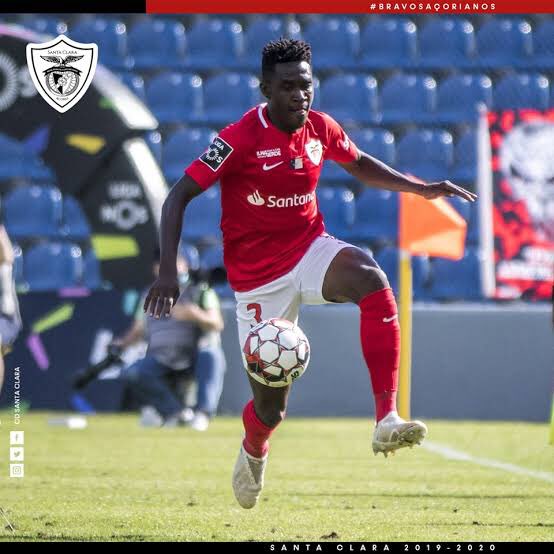 Nigerian defender, Zaidu Sanusi scored his first league goal of the campaign for Portuguese club CD Santa Clara as they came from behind to shock SL Benfica 4-3 and throw the league title back in favour- of FC Porto, AOIFootball.com reports.

The 24-year-old left-back started his 16th league game of the campaign for the visitors who were keen to stretch their unbeaten league run to 6 games and they deservedly did so against the run of play when Anderson Carvalho put Santa Clara 1-0 up just before half time.

The hosts however struck back five minutes after the break via the boot of Rafa Sliva to make it 1-1 before Zaidu Sanusi restored their lead with a well-placed header from an Osama Rashid corner on the 57th minute.

Half time substitute Carlos Vinicius then struck twice in the space of two minutes 63 and 65 to give Benfica a 3-2 lead with less than half an hour remaining.

Brazilian forward Crysan however broke the heart of the visitors when he scored from the spot 10 minutes from time to make it 3-3 before he then set up the game-winner for Ze Manuel deep into stoppage time to seal a 4-3 win for Santa Clara.

Zaidu, who played for the entire match duration, had a rating of 7.0, made 3 clearances, one interception and tackle each, won 6 duels, and also made one key pass in the encounter.