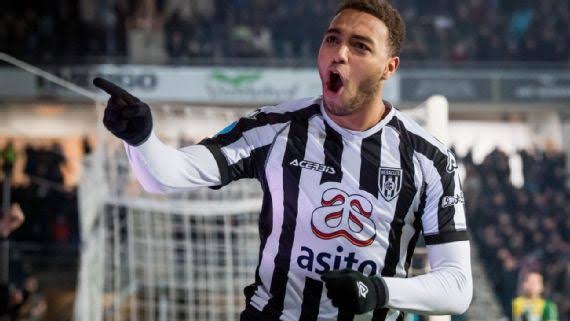 Super Eagles forward, Cyriel Dessers is on the verge of a summer transfer to Belgian side KRC Genk after discussions between his representatives and the club entered advanced stages, AOIFootball.com can authoritatively confirm.

The Eagles new invitee caught the eye of several top European clubs after a breakthrough season with Heracles Almelo where he scored 15 league goals in 26 games to finish joint top scorer before the league was abandoned due to Coronavirus.

A close source to the player told AOIFootball.com exclusively that although no official conclusion has been reached between Almelo and Genk, the transfer could scale through in the coming days.

“There is a strong interest from Genk. Nothing official yet, but we’re still talking,” the source disclosed to AOIFootball.com.

The 25-year-old striker joined Heracles from FC Utrecht in July last year and was an instant hit for the club as he scored 20 goals and added another 6 assists in all competitions.