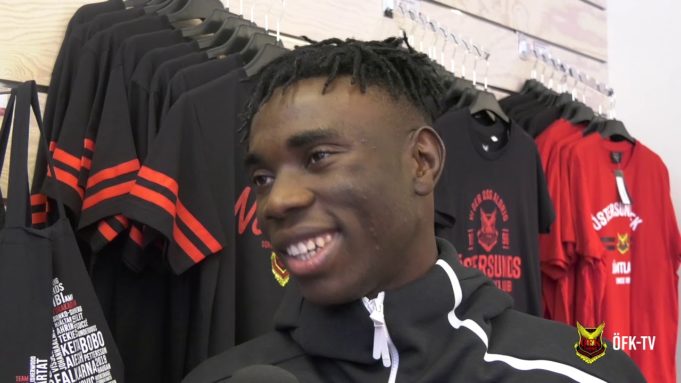 Nigerian youngster Jordan Attah Kadiri scored his first league goal of the campaign for host Ostersunds FK as they slumped to a 2-4 home loss to early leaders IFK Norrkoping on matchday 4 of the Allsvenskan, AOIFootball.com reports.

Without a win in their opening three league games, the former Nasarawa United forward led the line for the hosts with 18-year-old Ishaq Abdulrazak among the substitutes for the visitors.

After a cagey opening half an hour the host took the lead against the run of play when Simon Kroon picked up a pass from the goalkeeper in his own half with the striker driving forward before unleashing a belter which flew straight into the net for 1-0.

Christoffer Nyman then equalized for the visitors from the spot just before the half time whistle as both sides went into the break level.

Kadiri then restored his side’s lead six minutes after the restart when he fired past the goalkeeper from close range after being fed by substitute Nebiyou Perry to make it 2-1.

Ishaq Abdulrazak was then introduced for the visitors moments later before Christoffer Nyman equalized with his second of the match on the 69th minute to make it 2-2 with Simon Therm completing a late comeback on the dot of 90 minutes to make it 3-2.

Abdulrazak then got into the act as he ensured a comprehensive win when he set up Saed Haksabanovic deep into injury time to complete a 4-2 win.