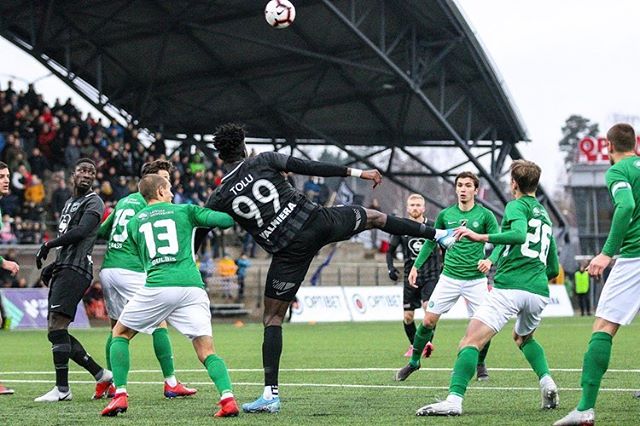 Nigerian players continued their fine form in the Latvian Virsliga with Tolu Arokodare proving to be the ‘Mr reliable’ for Valmeria as he scored his 4th consecutive goal whilst Nnamdi Offor was also on target for Daugava, AOIFootball.com reports.

Aliyu Adam and Lucky Onyebuchi Okpara: 20-year-old Aliyu Adam started for hosts Spartaks as they were forced to a goalless draw at home by visiting FK Tukums.

The young midfielder however made way in the 74th minute for compatriot Lucky Okpara as the hosts missed the chance to move up to third on the log.

Olaide Badmus was also solid for the visitors who claimed a hard-fought win on the road whilst Richard Emeka Friday was introduced for the hosts just before the hour mark but could do nothing to aid them to victory.

Nnamdi Offor and Idowu Akintola: Both Nigerians were on from start to finish for BFC Daugava Daugavpils as they threw away a two-goal lead to fall 3-2 to visitors Rigas Futbola.

Valerijs Afanasjevs put the hosts ahead after just eight minutes before Nnamdi Offor made it 2-0 with his fourth goal of the campaign twelve minutes later as they went into the break with a solid lead.

Emerson Deocleciano and Tomislav Saric quickly made the lead vanish after the hour mark to draw scores level before Robert Savalenieks scored the winner nine minutes from time to seal a 3-2 win for the visitors.