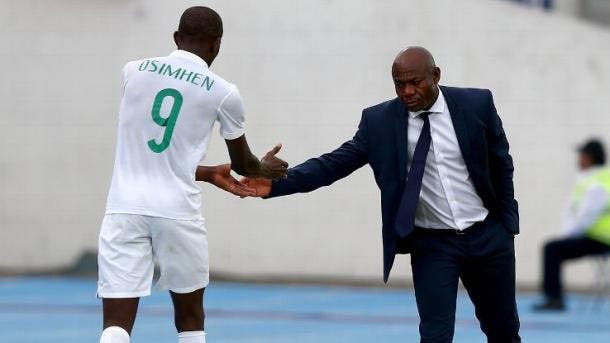 Former Golden Eaglets gaffer, Emmanuel Amuneke has once again showered his praise on one of his brightest students, Victor Osimhen, urging him to remain humble and focused following his big-money move to Napoli, AOIFootball.com reports.

The former Tanzania national team coach who spoke exclusively to AOIFootball.com, further hailed the player’s will to succeed, stating that he must now ensure he continues to do the right things to help him excel in Italy.

“My advice to Osimhen is to remain calm in all that he does. This is a very big move for him and it’s the will of God on his life. So he should remain focused and know that he still has a long way to go.

“He should always remember that this is just a stepping stone for him; age is on his side and I’m very happy to see him make this big move,” Amuneke said.

The former Green Eagles star further added that he is proud to always see players who have worked under him progress, whilst also wishing Osimhen the best of God’s favour in his new club.

“It’s amazing to see the players that have passed through me making progress.

“Osimhen is one player that never gives up, he always wants to play and win even when all odds are against him. I wish him all the best in Napoli and hopes he finds God favour,” Amuneke concluded.