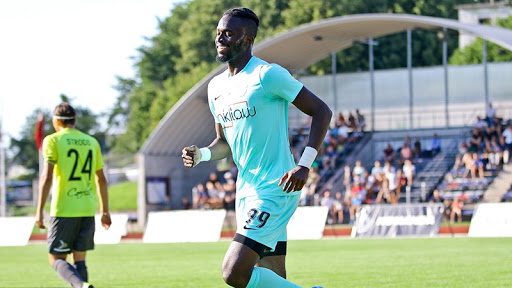 Nigerian youngster Tolu Arokodare continued his fantastic form in the Latvian Virsliga on Friday night when he scored his first career hat-trick to help his side Valmeria move up to third after their 4-1 win away at FK Tukums, AOIFootball.com reports.

There were however goals for Emeka Basil and Idowu David Akintola who grabbed his second to help his side to a huge away win.

The 19-year-old needed just 5 minute to announce himself as he bundled home the opener for Valmeria before fellow countryman Emeka Basil equalized with a ferocious effort in 20 minutes to make the game 1-1.

Kriss Karklins then put the host 2-1 up ten minute after the restart when he put through his own goal before Arokodare made it a one-man show afterwards.

The lanky attacker headed home the equalizer after the hour mark before he then sealed all three points on the dot of 90 minute to earn his side a hard-fought 3-2 comeback win.

The Nigerian striker has now scored 12 leagues goals from 12 games this season making him the league most lethal forward after 13 rounds of matches.

Idowu David Akintola and Joshua Akpudje: Both Nigerians continued their center-back partnership for BFC Daugava Daugavpils as they traveled away to Germany to face FS Metta LU.

Akintola however stole the show when he headed home five minute after the half-hour mark to give his side a 1-0 lead going into the half time break.

Four more goals in the second half ensured the Nigerian pair maintained their unbeaten run to four games as they moved up to 5th on the log standings.

Chuba Akpom loaned out to Brighton