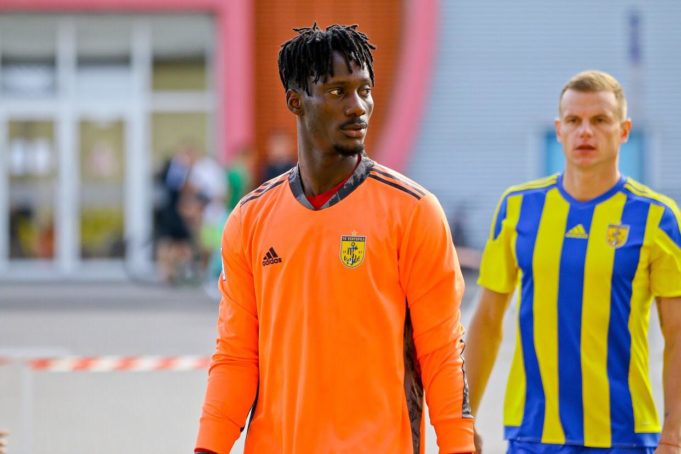 Former U-17 World Cup winner, Dele Alampasu believes his time in the national team will come soonest after being the only active Nigerian goalkeeper currently in Europe, AOIFootball.com reports.

The young lady has been out of the national team for a while but a move to FK Ventspils earlier in the year has now rekindled his chances of a return as he now boasts of regular playing time matched with series of brilliant performances.

Speaking to AOIFootball.com after his side drew 1-1 at home to Spartaks, the 23-year-old said that it has been an amazing journey so far for him and hopes to keep doing well whenever he is given the nod to start in goal by the coaches.

“It has been an impressive start to life in Latvia for me. I came here to play regularly and I’m happy with the game time I’m getting and hope it keeps getting better for me and the team.

“Every player’s dream is to play for his country, and I have always cherished being invited to the Super Eagles. Hopefully, I will get my time again now that  I’m playing regularly with my club,” Alampasu stated.

He also stated that being the most active Nigerian goalkeeper at the moment might be an advantage for him but believes the coaches will have the final say.

The former CD Feirense shot-stopper has featured in 6 games for FK Ventspils this season with head coach Viorel Frunza making use of both Alampasu and Kostayan Makhanovsky in the 13 league games played so far.

The Nigerian has however contributed to more points when given the chance to man the post with 10 points (62.5%) of their total league points so far.

LaLiga: Leganes will bounce back from Villarreal loss, says Omeruo