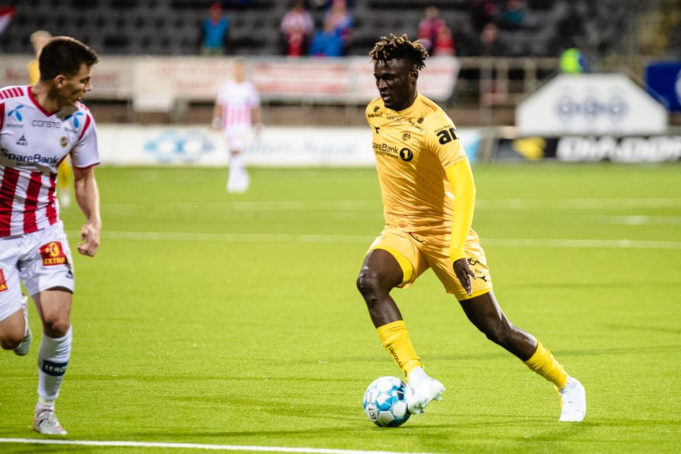 Nigerian youngster Victor Okoh Boniface continued his fine form in the Norwegian Eliteserien when he scored twice in the colours of Bodo/Glimt on Saturday as they made light work of IK Start, whilst Leke James netted his 7th league goal to lead his side to victory, AOIFootball.com reports.

Leke James: The 27-year-old started his 9th League game of the campaign hoping to end his 5 game goal drought with the host needing a win to close in on first place Bodo/Glimit.

The Nigerian was well involved in the opening exchanges and should have put his side ahead earlier but however fell short as he failed to direct his well-timed header past the goalkeeper.

Both teams however failed to find the breakthrough in the first 45 minute before Molde was however a golden opportunity in the second period from the penalty.

James then stepped up but saw his effort saved with the forward immediately making amends moments later as he fired home immediately for 1-0 from the resulting corner kick.

Marcus Pedersen then converted four-minute into stoppage time as the host sealed a comfortable 2-0 win.

Victor Okoh Boniface and Akinola Akinyemi:  Boniface was on for only his 3rd start of the campaign, leading the line for league leaders Bodo/Glimt who entertained IK Start to the Aspmyra Stadion.

The 19-year-old needed just 16 minutes to register his presence in the game when he headed home from a Philip Zinckernagal cross and Patrick Berg doubled their lead five minutes after the half-hour mark to make it 2-0.

A second-half brace from Jens Petter Hauge either side of a Philip Zinckernagel strike put the host 5-0 up before the hour mark with Boniface also grabbing his brace and his 5th of the campaign when he fired home on the hour mark to complete a 6-0 win.

Adeleke Akinyemi was a half time substitute for IK start but he could do little to stop them from suffering their 8th league loss of the campaign.