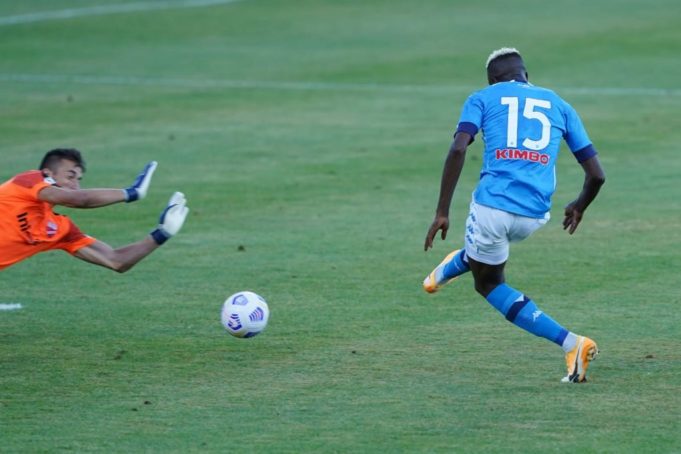 Super Eagles forward, Victor Osimhen continued his perfect start to life at new club Napoli as he scored thrice for the second consecutive give to help them to a 4-0 win over Serie C side Teramo, AOIFootball.com reports.

Still smarting from his debut hat-trick in last Friday’s trashing of L’ Aquila, the former Lille goal poacher led the line for the boys from Naples as he needed just four minutes to put them ahead from close range.

Hirving Lazano then doubled the lead for Gennaro Gattuso’s men with a stunning right-footed effort ten minutes later as they went into the break with a 2-0 lead.

Osimhen then completed his hat-trick in quick succession after the hour mark, first slotting the ball underneath the goalkeeper after he was played through by Amin Younes, before wrapping up the victory four minutes later with another well-taken effort.

The Nigerian was then replaced on the 75th minute as they now hope he continues his goal-scoring form when the league kicks off in earnest.