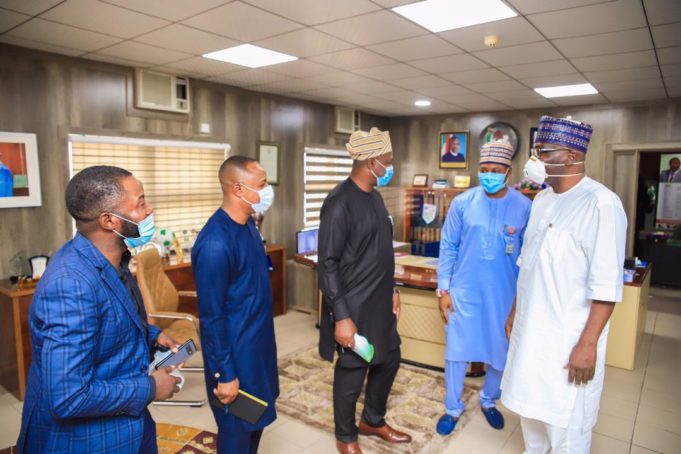 At a meeting that yielded fruitful deliberations, the two sports lovers discussed prospects in youth and sports development. Governor Abdulrazaq announced that progress has been made in immortalizing football icon, Rashidi Yekini, by naming the Kwara State Sports Complex Stadium, Ilorin, after him. He said, “We will send a bill to the State House of Assembly to immortalize Rashidi Yekini with the name of the stadium changing, after the approval.”

The Minister of Youth and Sports Development, Mr. Sunday Dare also told the Governor about the series of letters that the Ministry had written to the Kwara State Government for the immortalization of the late football legend. During the courtesy visit, the Governor of Kwara State, His Excellency, Abdulrazaq Abdulrahman revealed his admiration for the US ‘94 squad.

According to the Number 1 citizen of Kwara State, “I was in the stadium in the US when Daniel Amokachi scored what seemed to be the best goal against Greece. It was quite memorable to me as an ardent lover of the round leather game. After that goal, I fell in love with Jersey “Number 14” which Daniel Amokachi AKA “The Bull”, wore. Immediately after the tournament, I knew it will be hard to have these sets of players who are committed and great footballers.” According to the Governor, he was looking forward to hosting the same US ‘94 Squad in Ilorin, as another way to immortalize the late Rashidi Yekini who hailed from Kwara State; Ira Local Government to be precise. The SA Sports to the President, Daniel Amokachi, was in the gathering alongside the Minister, to receive the sports-loving Governor of Kwara State.

The US ‘94 squad was ranked by FIFA, the 5th best team in the world after the World Cup. Since that time till date, the achievement and ranking of the US ’94 Squad happen to be the best for the Super Eagles of Nigeria, in terms of FIFA ranking. History has it that the ’94 Squad is the best the country has ever produced in the round leather game. 2 Mr. Dare urged the Kwara State Governor to sustain his support for sports development while noting that sports help to reduce social vices. “

I want to thank His Excellency for hosting our biggest youth game in Ilorin, your Excellency we are coming to Ilorin again because of the facilities at the University of Ilorin. I love the fact that His Excellency, Abdulrahman Abdulrazaq, loves sports. I want to encourage his Excellency to invest more on sports,” he stated.