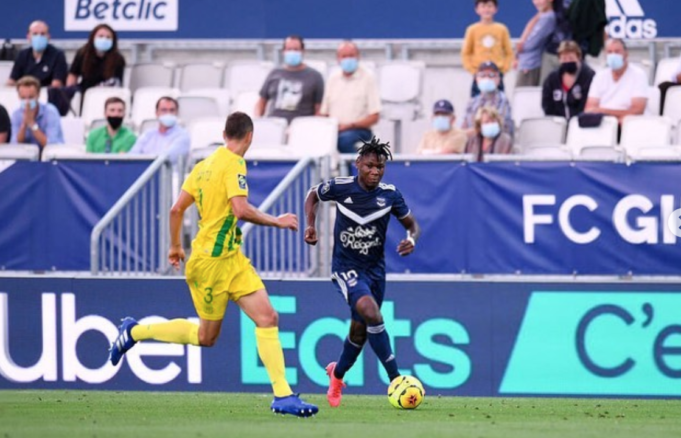 Super Eagles winger, Samuel Kalu made the most of his first start of the campaign, delivering a near-perfect performance on the flanks to help Bordeaux claim a hard-fought point in their goalless draw at home to Lyon, AOIFootball.com reports.

With speculations linking him with a move away from the club, the 23-year-old started in the right hand of the wing with compatriot Josh Maja dropping to the bench as he hosts hoped to move up to first on the log with a win.

They were however made to do plenty of the defending by Lyon who were still fresh from reaching the UCL semifinals, with Bordeaux holding their backline in a one-sided goalless first half.

Kalu then made way after the hour mark for Yacine Adli before Maja was introduced minutes later but his presence failed to give them the much needed 3 points but they remain unbeaten after three rounds of matches with 5 points.

Kalu was rated among the standout performers on the night, earning a rating of 7.0, completing 78% of his passes, making 1 key pass, winning 5 duels, completing 100% of his dribbles, and also adding to the defense with 3 key tackles.