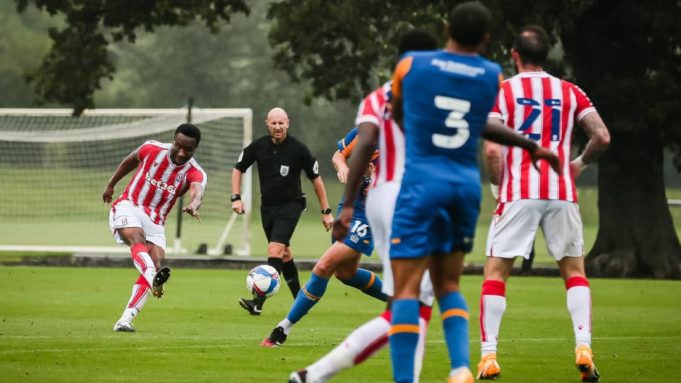 Former Super Eagles captain, John Obi Mikel began his second stint in the English Championship with an eye-catching performance to help stoke to a point in their opening day clash away at Millwall, AOIFootball.com reports.

Freddie Ladipo and Michael Ihiekwe: Both players were on from the start for Rotherham United who began the new season with a win as they defeated Wycombe Wanders 1-0 at the Adams Park.

With the game heading for a goalless draw captain Michael Ihiekwe popped up with the winner as he headed home deep into added time to seal all 3 points for the visitors.

Mikel Obi: The former Chelsea midfielder made his competitive debut for Stoke City as they held host Millwall to a goalless draw to earn their first point of the campaign.

The 33-year-old finished with a rating of 7.0, completing 87% of his passes, winning 7 duels, whilst also making huge defensive contributions with 3 tackles and one interception and blocked shot.

Dominic Iorfa and Seyi Ojo: Dominic Iorfa was on from start to finish as his Sheffield Wednesday side began the campaign with a 2-0 win away at Cardiff City who also gave Seyi Ojo a first league start of the campaign.

Iorfa was however the better performer of the two players keeping a clean sheet and finishing with a rating of 7.0, whilst Ojo who made way after the hour mark finished with a rating of 6.4.

Bright Osayi-Samuel: The Eagles hopeful was on for 90 minutes but failed to find the net as QPR recovered from their shock EFL exit to begin the championship season with a 2-0 win over Nottingham Forrest.

Ovie Ejaria and Sone Aluko: Former Liverpool academy graduate Ovie Ejaria had a mixed start to the season as he scored his first goal of of the new season to propel his Reading side to a 2-0 win away at Derby County.

The Eagles hopeful however went off injured in the second half and was replaced by former Eagles attacker Sone Aluko.