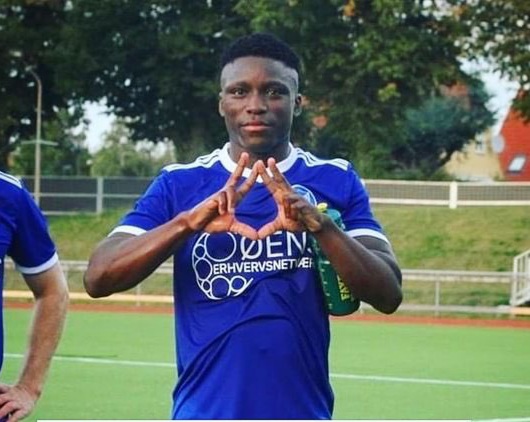 Golden Eaglet striker Olakunle Olusegun continued his impressive start to life in Europe after he made an astonishing start to the Denmark 1st Division, following his brace heroics in the colors of Fremad as they dismantled Vendsyssel FF 6-0, AOIFootball.com reports.

Still smarting from his hat-trick performance on his first official game for the club, the 18-year-old was named on the bench alongside fellow Nigerians Sodiq Rasheed and Samson Iyede as they hoped to start the campaign with a win.

Reda Rabeï gave Amager an 11th-minute lead before the duo of Kristoffer Munksgaard and Emmanuel Toku put the game beyond the reach of Vendsyssel who found themselves down 3-0 at half time.

Olakunle was then introduced after the break for Kasper Fisker before Kristoffer Munksgaard grabbed his brace on 77 minute to make it 4-0.

The Nigerian attacker then got into the act 60 seconds afterward as he made it 5-0 on 78th minute before sealing the win two minutes from time with another strike to complete a 6-0 win.

The Golden Eaglet striker has now scored 5 goals in 2 games since his move to Europe and will surely be a player to watch in the future should he continue with his impressive goals ratio.