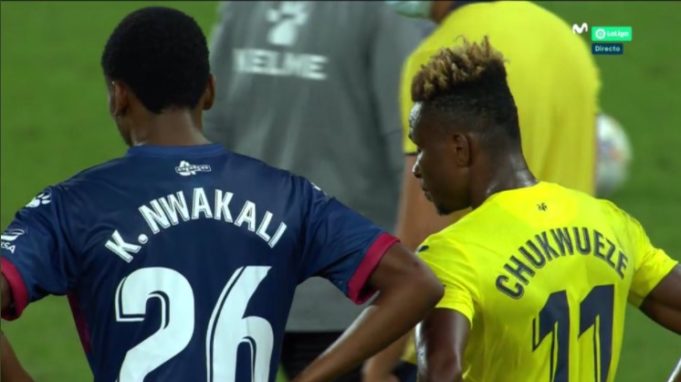 Former Golden Eaglets skipper, Kelechi Nwakali has revealed his moment of joy last weekend when he made his LaLiga debut away at Villarreal, AOIFootball.com reports.

The former Arsenal youth player, who spoke to AOIFootball.com after the game, stated that playing against his old-time friend and brother Chukwueze, even made the fixture more special to him, having both come through the ranks at U-17 level.

“I personally felt good playing against him as he is my personal friend since our U-17 days and I wish him all the best in the season. It was a good game for me and I believe both teams gave a good account of themselves.

“He even joked that Huesca has a never-tiring spirit despite just coming into the league and he wished us the best in the LaLiga this campaign,” Nwakali said.

The 22-year-old was a second-half substitute for the visitors as he featured for 28 minutes where he completed 100% of his passes, won one duel, and also made one key pass.

He will however be pushing for his first LaLiga start on Sunday when Huesca host fellow promoted side Cadiz at the El Alcoraz.