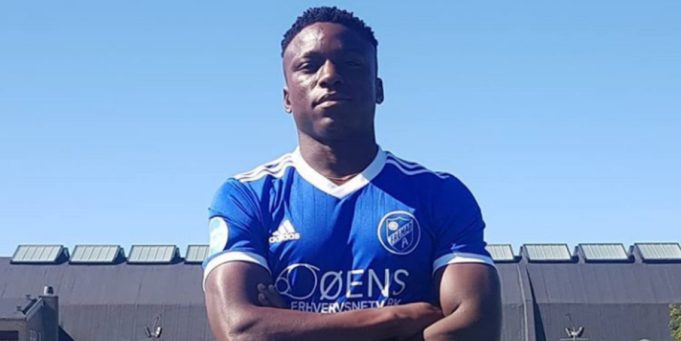 Former Golden Eaglets striker, Olakunle Olusegun has said he is overwhelmed by his blistering start to life in Europe after back-to-back goals for Danish first division side, Fremad Amager, AOIFootball.com reports.

The 18-year-old striker joined the club at the end of last month and immediately was an instant impact less than 24-yours later as he scored a hat-trick on his debut before also following up with a brace on his league debut.

Olakunle, who was part of the Eaglets’ squad to the last U-17 World Cup in Brazil, told AOIFootball.com exclusively that his performance has earned him praises from both his coach and teammates who have now nicknamed him ‘The Beast’.

“I go into every game with determination and enthusiasm that I can do everything and always try to score a goal or help my team win.

“It has been an amazing start for me but above all, I give thanks to God Almighty; to score 5 goals in two matches honestly I did not see that coming.

“My coach was very happy about my performance and praised me for being a good player but I told him my best is still yet to come,” Olakunle concluded.