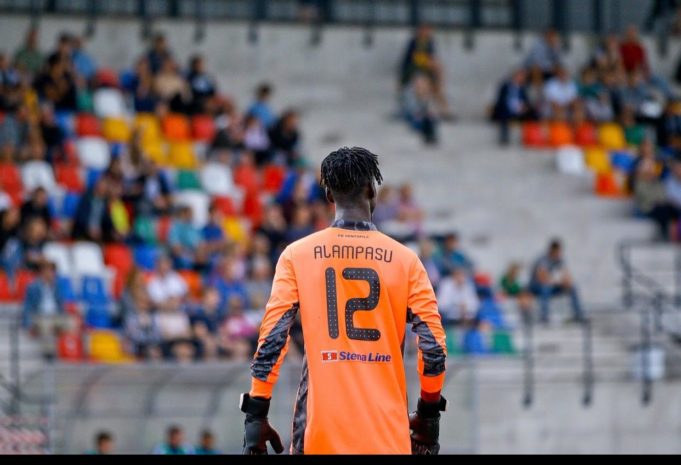 Former U-17 World Cup winner, Dele Alampasu has disclosed that his time in the Latvian League has helped him improve greatly as a goalkeeper, even as he continues to work hard to remain consistent on and off the field of play, AOIFootball.com reports.

The 23-year-old has enjoyed more regular minutes since his move from Feirense to FK Ventspils in February, tasting European football for the first time after making his debut Europa League appearance last month.

Alampasu, who still hopes for an Eagles recall, further highlighted the impact of the move on his career so far, stating that he now wants to keep working hard to cement the club’s number 1 shirt.

“I believe my game has improved since moving to Latvia. I have had more minutes than before and this has helped me improve my goalkeeping skills.

“Playing in the Europa League has also helped boost my confidence because it’s a competition that is only second to the Champions League which I hope to play in someday. For now, I hope we can continue to do well and reach the group stage of the competition,” Alampasu said.

The 2013 FIFA U-17 Golden Glove winner helped Ventspils reach the second round of the Europa League qualifiers and will now need to replicate the same performance on Thursday when they host the Norwegian side, Rosenborg in the second round.