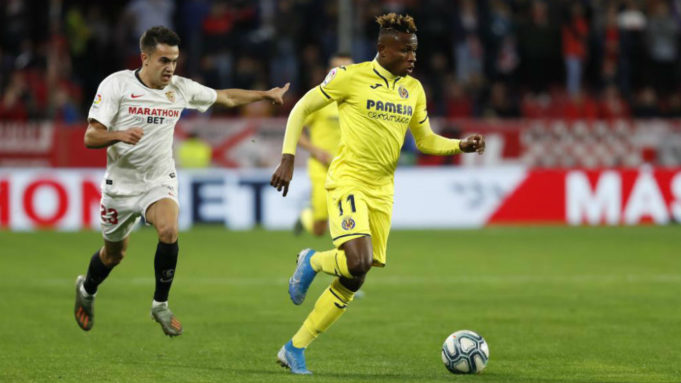 Super Eagles winger, Samuel Chukwueze produced a near-perfect performance in the colours of Villareal to help them earn their first win of the campaign following a 1-2 comeback win away at Eiber, AOIFootball.com reports.

After a not too impressive opening day draw at home to Huesca, the Nigerian winger kept his place in the starting XI with Villareal hoping to make the most of their back to back home games and pick their first 3 points of the season.

The however started on the front foot and thought they had taken the lead 10 minutes into the clash when Gerard Moreno scored but their joy was shortlived as VAR rightly canceled the goal.

The visitors then took the lead five minutes after the break when Kike converted from an Edu Exposito pass to make it 1-0 before the hosts turned to the bench with a double substitution just before the hour mark.

Chukuweze then kept his composure in the box to set up Moreno who equalized for 1-1 on the 63rd minute before the visitors snatched the win and all 3 points 19 minutes from time when Moreno this time turned provider for Alcacer to score the winner.

The Nigerian was on for 85 minutes and impressed with a rating of 7.5, made 3 key passes, created one big chance, won 6 of his duels, and also made 1 key tackle.