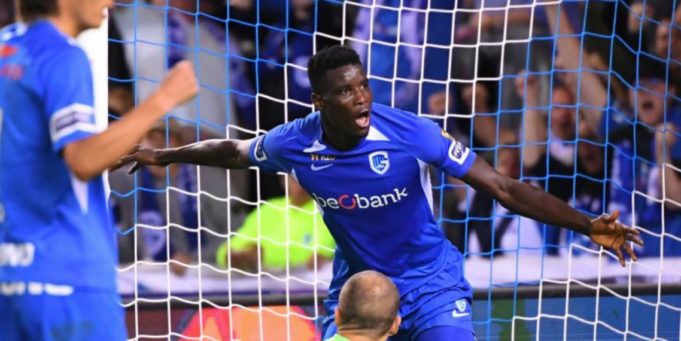 Without a win in their last four league games following their opening day win away at Zulte Waregem, top scorer Onuachu was retained upfront with joint top scorer Cyriel Dessers once again starting from the bench despite coming off the bench to score last time out.

They however had a bad start to the clash when the visitors took a shock lead after just 6 minutes when the Swedish duo of Kerim Mrabti and Gustav Engvall combined well and Kerim tapped home for 1-0.

Onuachu then drew his side level four minutes later when he headed home from a Joakim Maehle cross, his 3rd League game of the campaign.

The Nigerian was twice close to giving his side the lead, first heading against the crossbar before he then struck the post again as both sides went into the break level at 1-1.

Junya Ito finally put the hosts in front ten minutes after the break with a smart finish before Onuachu ensured the points were safe as he scored his second of the game eight minutes after the hour mark to seal a 3-1 win.

The brace takes Onuachu to 4 goals for the season one behind the leading trio of Rezaei, Holzhauser, and Heymans as Genk move up to 8th on the log with 8 points from a possible 18 points.

Ideye in cloud nine after scoring first goal in China