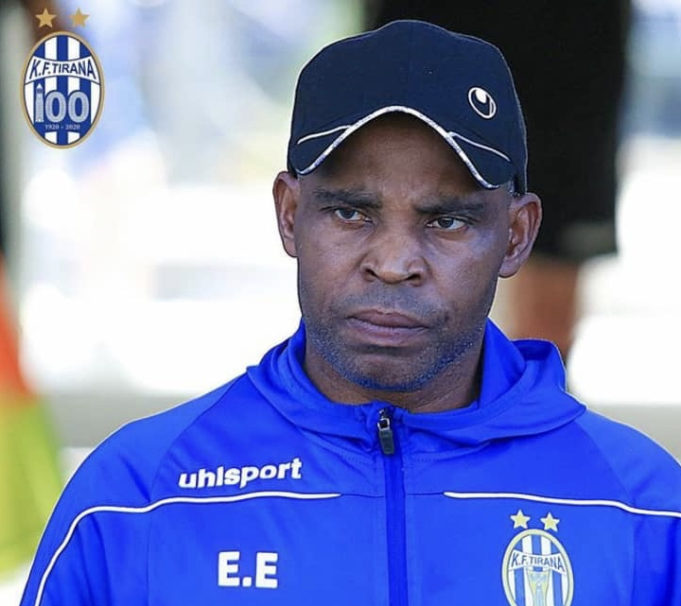 The hope of becoming the first Nigerian coach to reach a group stage of a European competition came to an end for coach Ndubuisi Egbo as his Albanian side KF Tirana were dumped out of the Europa League by Swiss’ Young Boys on Thursday, AOIFootball.com reports.

The 2002 AFCON bronze medalist became the first African coach to win a European topflight crown when he led Tirana to the Albanian title last season and was already the first African to manage a team in European club competition when he guided Tirana through two rounds of Champions League qualification matches.

A Christian Fassnacht goal two minutes before halftime and a second-half brace from Jean Pierre Nsame gave Young Boys victory as his side crashed out 3-0 on the night.

Leon Balogun and Oghenekharo Etebo: Super Eagles defender Leon Balogun was an unused sub as Rangers booked their spot in the group stages with a 2-1 victory over Galatasaray at the Ibrox Stadium.

Midfielder Oghenekaro Etebo came on six minutes after the hour mark but could do little as his side missed out on playing in Europe for the 2020/2021 season.

Ramon Azeez: He was not listed for the Spanish side Granada who booked their place in the group stages following a 3-1 win at Swedish side Malmo FC.

Aniekpeno Udoh: He came off the bench to score but his effort only proved consolatory as his Finnish side KuPS were dumped out of the competition 3-1 by Romanian side CFR Cluj.

Yusuf Otubanjo: He was a 67th-minute sub for Ararat Armenia but could not prevent his side from exiting the competition at home as they fell 2-1 to Red Star Belgrade.

Samuel Adegbenro: The winger saw 65 minutes of action as his Norwegian side Rosenborg lost 2-0 at home to Dutch club PSV Eindhoven who had 18-year-old Nigeria-eligible Noni Madueke on the bench for all 90 minutes.