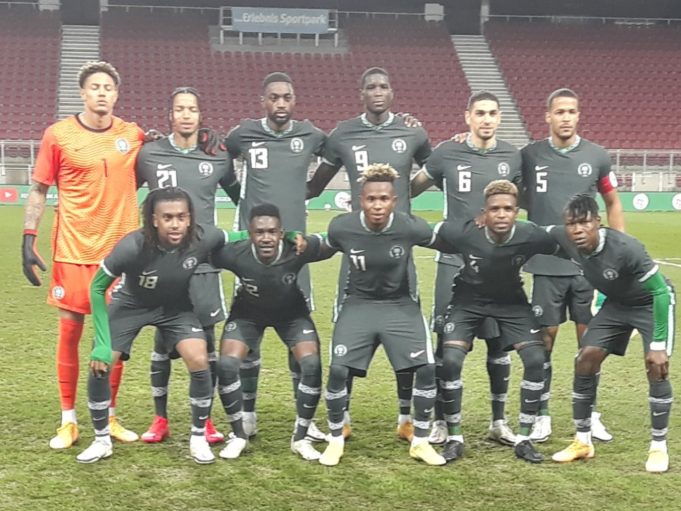 Nigeria’s Super Eagles were pipped 1-0 by reigning champions Algeria in an international friendly played in Klagenfurt, Austria on Friday night.

The Super Eagles, who capped four new players in a fast-paced friendly game, 11 months after they last gathered for any football session as a result of the COVID 19, had their last game against Lesotho in Maseru in an AFCON qualifying game, which they won 4-2.

The Fennecs started powerfully and quickly forced a corner kick in the third minute, which was bundled to safety. Three minutes later, somewhat serendipitously, the African champions were ahead when Ramy Bensebaini reacted faster to a loose ball from another corner kick.

The goal was actually a reflection of the state of flow of the game, as the Algerians reacted faster and cuddled the ball better. Iwobi, latching onto the ball as Samuel Chukwueze cut inside from the right, saw his shot blocked. Okoye saved brilliantly from Farid Boulaya in the 20th minute, and two minutes later Alex Iwobi nearly restored parity but his shot from 22 yards screamed narrowly past Alexandre Oukidja and the far post.

Iwobi again enabled a flow from the middle in the 31st minute but Samuel Kalu’s shot was wild. Five minutes later, Maduka Okoye flung himself impressively to the right to parry a free-kick by Said Benrahma. The impressive Sanusi and Kalu had shots saved and a Samuel Kalu in-swinger missed everyone in the box as the first half came to a close.

The Eagles came into the second half with determination to add more grit to their game, Mikel Agu coming in for Onyeka. On the hour, Tyronne Ebuehi’s pile-driver from the edge of the box flew past the goal with Oukidja beaten. Six minutes from time, Okoye again came up big, tipping away a tricky lob by substitute Fares. The Eagles got an opportunity to level at the death, but substitute Kelechi Iheanacho’s dipping free-kick from the right flew narrowly over the sticks.

Left-back Zaidu Sanusi, right-back Kevin Akpoguma and midfielders Frank Onyeka and Samson Tijani all won their first caps and will look to add to these when the Eagles take on Tunisia in an der Glan on Tuesday.

Friday’s encounter was the first-ever friendly game between both countries, as all their previous 21 games were at a competitive level in which Nigeria won 9, drew 3, and recorded 9 losses.

Ligue 1: Lille were unlucky to lose to Amiens, says Osimhen