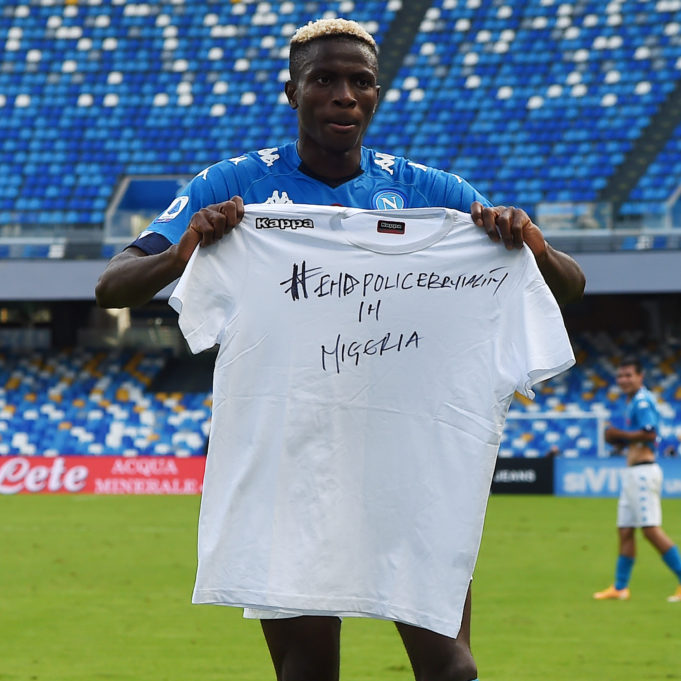 Super Eagles forward, Victor Osimhen scored his first competitive goal for Italian side Napoli in their 4-1 win at home to Atalanta, AOIFootball.com reports.

Having been ducked one point for their failure to honour their match day 3 clash away at Juventus before the international break, the hosts handed the African record transfer his second league start of the campaign, hoping to make it 3 wins from 3.

Following a goalless opening 20 minutes, Napoli turned on the heat with Osimhen a constant treat tho the visitor’s defense with Mexican forward Hirving Lonzano putting them 1-0 up on 23 minutes.

The forward then made it 2-0 four minutes later after an assist from Driest Martens before Matteo Politano completed a swift seven minutes for the hosts when he made it 3-0 on the half hour mark.

Osimhen then got his first goal two minutes before the break when he perfectly controlled a long ball from goalkeeper David Ospina with his chest, before calming moving away from his marker and then unleashing a shot from outside the box to make it 4-0.

The strike was Osimhen’s first goal from outside the box in over 18 months, having scored all of his 18 goals from inside the box last term with Lille in France.

Down but not out, the visitors grabbed a consolation in the second half via the boot of Sam Lammers before Osimhen was replaced for the final seven minutes as Napoli moved up to third on the log with 8 points.

The Eagles forward did produce a near perfect outing with a rating of 8.0, completing 80% of his passes, making 2 key passes, winning 8 duels and also making one key tackle.