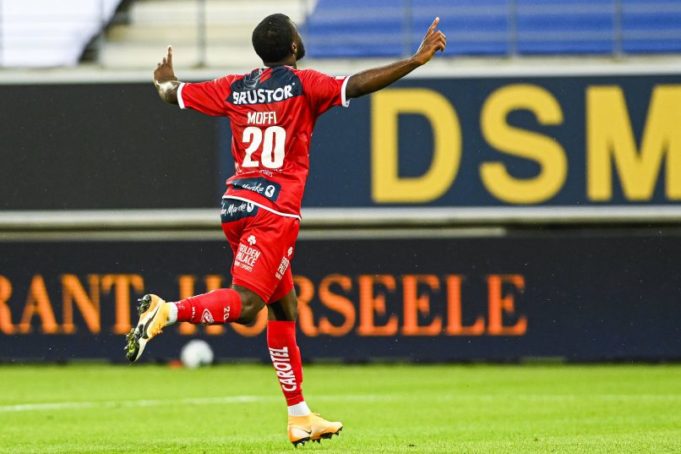 Nigerian striker, Igoboras Moffi Teremas grabbed the headlines for new club Lorient as he scored one and set up another on his debut to propel them to an impressive 1-3 win away at Stade de Reims, AOIFootball.com reports.

Without a win in their last five games, head coach Christophe Pelissier handed the 21-year-old deadline day signing his first start as the club hoped to move out of the relegation zone with a win.

Despite a positive start to the game, Lorient found themselves trailing in the opening 15 minutes Dereck Kutesa set up Moreto Cassama with the Guinea-Bissau midfielder making no mistake to fire home for 1-0.

The visitors, however, had chances of their own afterwards but failed to take them before they finally got their equalizer on the hour mark when Pierre-Yves Hamel low effort was somehow found its way past the goalkeeper for 1-1.

Moffi then got into the act four minutes afterwards when he was brought down by the goalkeeper after some impressive play with Yoane Wissa stepping up to convert the spot-kick and put Lorient 2-1.

The 21-year-old then got rewarded for his hard work on the night as he scored his first for the club ten minutes from time to wrap up a fantastic debut and earn Lorient their second win of the season.

Meanwhile at the Orange Velodrome in Marseille, Super Eagles forward Josh Maja came off the bench to score his second goal of the season as his Bordeaux side who were missing the services of on-form Samuel Kalu lost 3-1 to Marseille.

Goals from Florian Thauvin, Jordan Amavi, and an own goal from Pablo Nascimento put the host 3-0 up before Maja replaced Ben Arfa for the final seventeen minutes of the encounter.

The former Sunderland man, however, made the most of his time on the pitch as he kept his composure with three men on him to fire home seven minutes from time to put some respect on the scoreline.