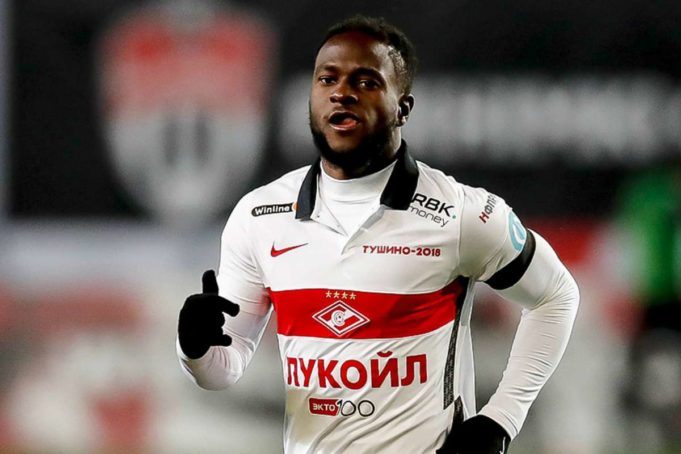 Former Super Eagles winger, Victor Moses came off the bench in the second period to debut for Russian side Spartak Moscow but it was another Eagle who stole the headline as he scored his first goal for FK Khimki, AOIFootball.com reports.

In a game that saw two 2018 World Cup players go head to head, Bryan Idowu was named among the starters for the host whilst Moses who recently completed a loan switch from Chelsea was named among the substitutes as both teams looked to improve on both ends of the table.

After a goalless first half, the hosts broke the deadlock three minutes into the second half from a quick break as Reziuan Mirzov fired home from just outside the box to put FK Khamiki 1-0 up.

Moses was then introduced on the 55th minute with the change producing an instant impact as the visitors were awarded a penalty less than 50 seconds afterwards when the Video Assistant Referee spotted an infringement in the box.

Aleksandr Kokorin stepped up to convert for 1-1 before Ezequiel Ponce ensured the comeback was completed three minutes after the hour mark when he converted from a Jordan Larsson to make it 2-1.

The Swedish forward then added his second of the game 13 minutes from time to make it 3-1 before Bryan Idowu scored what then proved to be another consolation when he fired home from inside the box five minutes from time with Spartak holding on for their 7th win of the season.

Anderlecht eager to have me back, says Onyekuru