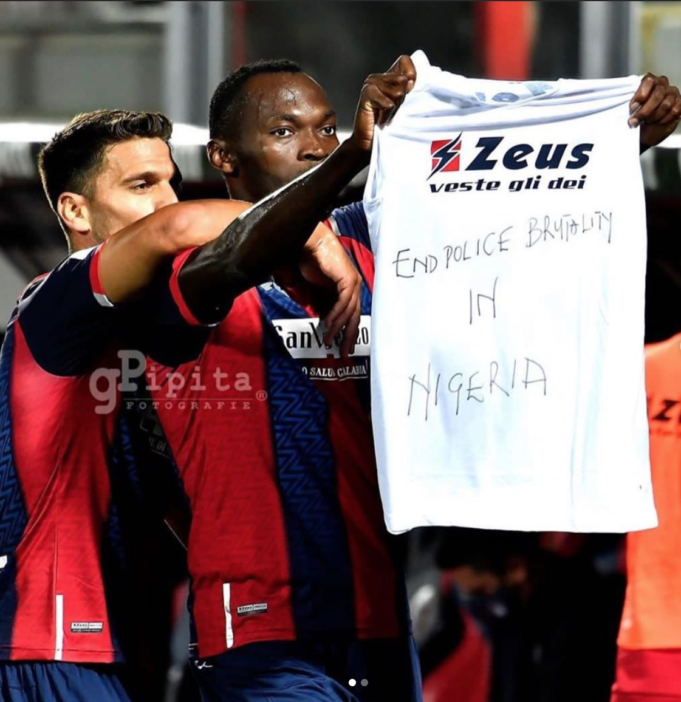 Nigerian international, Simy Nwankwo scored his second league goal of the campaign to help newly promoted Crotone to a hard fought 1-1 draw at home to champions Juventus on matchday 4 of the Italian Serie A, AOIFootball.com reports.

Without the service of star man and five-time Balon D’Or winner Cristiano Ronaldo, the hosts were hoping to make the most of his absence as they targeted their first point of the campaign having lost all three of their opening league games.

They were however handed a golden chance to take the lead 12 minutes into the clash when left-back Arkadiusz Reca was brought down in the box by Bonucci with the referee having no choice but to point to the penalty spot.

Simy then stepped up to convert to put his side 1-0 up much to the delight of the Crotone fans present in the stands.

The lead lasted for just 8 minutes as the champions hit back with a stunning attack with new signing Federico Chiesa who was making his debut found Morata with a perfect delivery as the Spaniard made no mistake to tuck home for 1-1.

The visitors were then reduced to 10-men in the second period when Chiesa was given his marching orders before Morata had a goal ruled out 11 minutes from time with Crotone holding on to claim their first point of the season.

Simy, who took his tally to 2 from 2, finished with a rating of 7.4, completed 100% of his dribbles and passes, won 4 duels, and also made one clearance to cap off a perfect outing.

‘NPFL teams must up their ante before going to the continent’