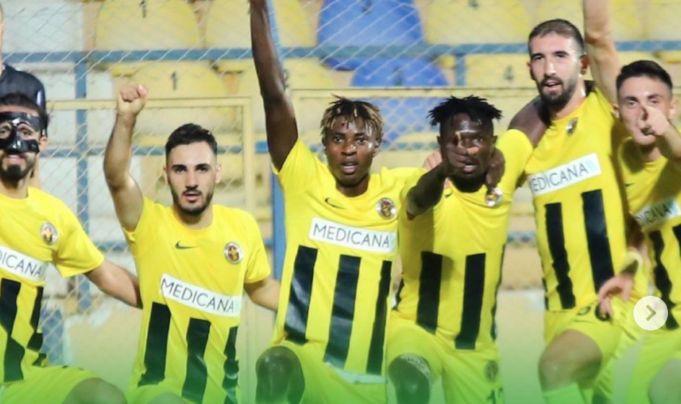 There was plenty of action for Nigerian players across different leagues in Europe with Eagles defender Kenneth Omeruo once again showing his class for Leganes, whilst there were goals for the duo of Sikiru Olatunbosun and Aniekpeno Udo, AOIFootball.com reports.

Kenneth Omeruo: The Eagles defender was on for the entire match duration as his Leganes side continued their surge in the LaLiga 2 table following their 1-0 win over Real Zaragoza at the Estadio Municipal de Butraque.

Second-half strike from Jose Manuel Arnaiz was all the host needed as they sealed their 4th win of the season and move up to 8th on the log with 12 points.

Omeruo who was on for the entire match duration had a game rating of 6.6 has made 4 clearances and also completed 75% of his passes.

Sikiru Olatunbosun: The former MFM star scored his first goal of the season for Menemen Spor as they defeated Bursaspor 2-1 to record their first win of the campaign.

The visitors took the lead on the 10th minute courtesy of Burak Kapacak before the host responded with a goal made in Nigeria as forward Rasheed Ibrahim provided the assist for Sikiru who turned home for 1-1.

Tidjani Anaane then scored the winner one minute from time as the host sealed the win to seal all three points with Olatunbosun named the man of the match following an outstanding performance.

Aniekpeno Udo: The 23-year-old scored twice for KuPS as they lost 3-2 at home to FC Haka despite the impressive performance of the Nigerian striker in front of goal.

Udo opened the scoring for the host on 12 minutes in what was his 5th goal of the campaign but the host equalized in the second half to bring scores to 1-1.

The former Viking FK forward then put his side ahead eight minutes after the hour mark to make it 2-1 but the visitors struck twice in the closing stages to seal a 3-2 win.

Enyimba: Ogungbote may get the axe this week