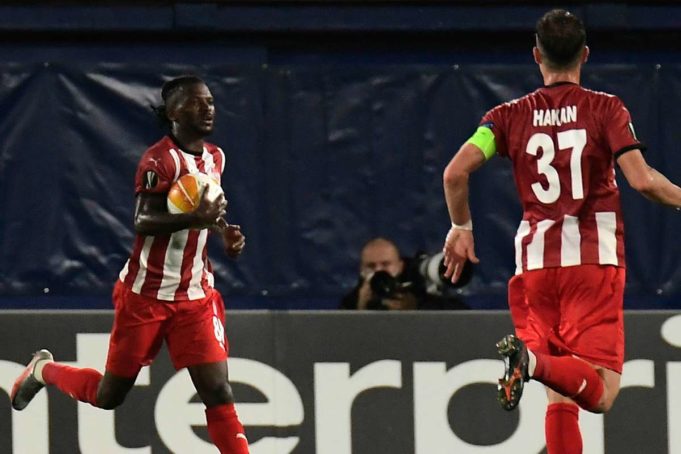 The UEFA Europa League entered its matchday 2 on Thursday with the duo of Peter Olayinka and Kayode Olanrewaju among the goal scorers, whilst it was another night to forget for forward Victor Osimhen who was sent off by the referee, AOIFootball.com reports.

Peter Olayinka: The Eagles forward was the match hero for Czech side Slavia Praha as he came off the bench to net the winner in their 1-0 win over German side Bayern Leverkusen.

Leon Balogun and Joe Aribo: Defender Leon Balogun was on for 90 minutes as he produced a very solid display for Rangers who continued their superb start to the season with a 1-0 win at home to Lech Poznań.

Fellow Eagle Joe Aribo came off the bench in the second half featuring in the final 20 minutes before the encounter.

Anderson Esiti: He was an unused substitute for PAOK as they drew goalless away at Spanish side Granda who did not list Ramon Azeez in the matchday squad.

Shehu Abdullahi: He was also on the bench for the entire match duration for Omonia Nicosia in their 1-2 loss at home to PSV Eindhoven

Victor Osimhen: The Eagles forward had a night to forget as he came off the bench before he was been sent off in the closing stages of Napoli’s hard-fought 1-0 win away at Spanish side Real Sociedad.

The Nigerian replaced Andrea Pategna after the hour mark before he then had a goal ruled out and then receiving two cautions within the space of 10 minutes to pick up his first professional red card.

Chidera Ejuke: The Eagles was very unlucky on the night with his CSKA Moscow side as they drew goalless at home to Dinamo Zagreb despite completely dominating the Croatian side.

Ejuke who was replaced in the second half after picking up an injury had a fine rating of 7.5, made 2 key passes, completed 8 of his 11 dribbles, and also won 9 of his duels contested.

Kelechi Iheanacho: Despite his opening day man of the match performance, the Eagles forward had to do with a place on the bench for the fit-again Vardy as Leicester City made it 2 in 2 following their 2-1 win away at AEK Athens.

First-half strikes from Vardy and Hamza Choudhury out the Foxes in cruise control before the host pulled one back in the second half with Iheanacho replacing Vardy for the final 20 minutes.

Kevin Akpoguma: The Eagles defender was on from start to finish as his German side made light work of Belgium KAA Gent, crushing them 4-1 at the Ghelamco Arena.

Samuel Chukweze: The winger produced yet another solid performance for Villarreal as they made it 2 wins out of 2 as they defeated Azerbaijan side Qarabag 3-1.

Following a goalless first half, the host took the lead in the second period courtesy of Owusu Kwabena but the visitors equalized almost immediately via the boots of Yeremi Pino.

Chukwueze then set up Alcacer for his side second six-minute from the time before the Spanish striker grabbed his brace deep into stoppage time to seal a 3-1 win.

Kayode Olanrewaju: The former Manchester City striker scored for the second straight Europa League clash but could not save his side from defeat as they lost 1-2 at home to Maccabi Tel Aviv

Following a goalless opening half, Kayode put the host ahead before the hour mark before Samba Camara saw red for the host following violent conduct.

The numerical advantage however worked against Sivasspor with Dan Briton and Dor Peretz netting in the space of five minutes to seal a 2-1 win for the visitors.