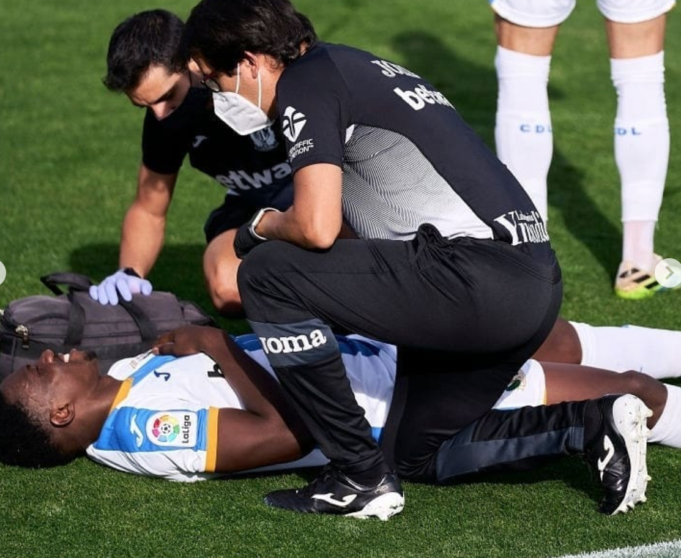 Super Eagles defender, Kenneth Omeruo has become the latest Eagle to suffer an injury while on club duties after the former Chelsea man lasted for just 48 minutes in Leganes’ 1-0 win over Mirandes on matchday 10 of the LaLiga 2, AOIFootball.com reports.

Having been named in the Eagles 24-man squad for this month’s AFCON qualifiers against Sierra Leone, the 27-year-old started his 7th league game of the campaign with the host hoping to bounce back from their midweek loss away at Sabadell.

Despite an impressive first-half performance, Omeruo’s afternoon was cut short two minutes into the second half as he suffered what looked like a hamstring injury with Leganes going on to claim a slim 1-0 win.

However speaking to AOIFootball.com shortly after the clash, the former Kasimpasa of Turkey defender confirmed the injury was more serious than he had thought and will now require further scans to determine the extent.

“Not a good one at all. I am not fine, I think it’s a hamstring but I will go for a scan tomorrow,” Omeruo confirmed in an exclusive chat.

The injury will come as a blow to Leganes who have found stability since the defender returned to the squad as they make a strong push to return to the elite division of Spanish football next season.

Eagles return is another opportunity for me to prove my worth, says Mikel Agu