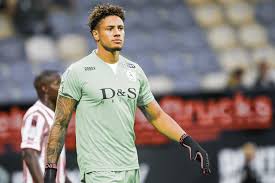 Super Eagles goalkeeper, Maduka Okoye produced a near-perfect outing in the colours of Sparta Rotterdam to lead them to their first win of the season away win at RKC Waalwijk, AOIFootball.com reports.

The 21-year-old had a nightmarish debut in the Eredivisie last weekend after conceding 4 in their loss to Heerenveen but was surprisingly retained for the visit to the Mandemakers Stadium as the visitors sought their first win of the campaign.

The Nigerian had to be alert twice in the first period as he produced two fantastic saves to keep the match goalless at half time.

Lennart Thy then put Rotterdam ahead just on the hour mark before Maduka was called into action in the closing stages but the former Fortuna Dusseldorf shot-stopper once again produced an impressive save to deny the hosts the equalizer.

With victory all but assured, Abdou Harroui then sealed the win for the visitors as he scored deep into stoppage time to wrap up a 2-0 win and move them out of the relegation zone.

Maduka, who now takes his form to the National team, had a big game rating of 7.6, made 4 saves, 3 of which was from inside the box, and also completed 45% of his passes.